Aaron Ramsey could be set for a surprise move to Bayern Munich after the Bundesliga giants expressed an interest in signing the 27-year-old Welsh midfielder when he leaves Arsenal next summer. (Sunday Express)

Barcelona are planning a move for Chelsea's Brazilian defender David Luiz in January. The 31-year-old is out of contract at the end of the season. (Sunday Express)

Chelsea and Manchester City both want to sign Sunderland's 17-year-old English midfielder Bali Mumba, who has only made four league appearances for the League One side. (Sun on Sunday)

Leicester players and fans on a game like no other

Tottenham want to sign Colombia midfielder Wilmar Barrios from Boca Juniors in January. The 25-year-old could be available for £16m. (Daily Star Sunday)

West Ham are considering a loan move for Greekstriker Kostas Mitroglou in January. The 30-year-old is currently at Marseille but would be available. (Mail on Sunday)

Everton are keen on a move for Crystal Palace's Englishright-back Aaron Wan-Bissaka, 20, and could allow English winger Ademola Lookman, 21, to move the other way as part of the deal. (Sun on Sunday) 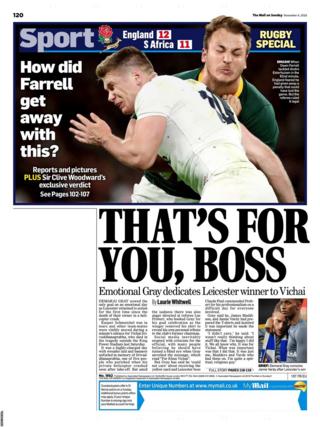