Real Madrid manager Julen Lopetegui is close to being sacked and the Spanish giants' B team coach Santiago Solari has appeared to suggest he is on standby to take over on a caretaker basis. (Mail)

Fulham boss Slavisa Jokanovic has been given two games to save his job after the Cottagers slipped into the bottom three of the Premier League following a 4-2 defeat by Cardiff City. (Times - subscription required)

Manchester United manager Jose Mourinho is to carry out an internal investigation into how his line-up was leaked before Saturday's draw with Chelsea. (Mail)

Who is 'very capable' of taking Alli's place at Spurs?

Find out who made Garth Crooks' team of the week and pick your own...

Manchester United and France forward Anthony Martial, 22, has denied ever having a tense working relationship with Mourinho. (Evening Standard)

Newcastle United boss Rafael Benitez, whose side are bottom of the Premier League, admits time is running out for him at St James' Park. (Mirror)

Former Magpies manager Alan Pardew says Benitez is suffering similar problems to ones he had while in charge. (Newcastle Chronicle)

Paris St-Germain midfielder Adrien Rabiot, 23, who has been linked with Liverpool and Juventus, is close to renewing his contract with the French club. (Calciomercato)

Leicester City boss Claude Puel says it is not on his list of January window priorities to recall England Under-21 midfielder Harvey Barnes, 20, who is on a season-long loan at Championship side West Brom. (Birmingham Mail)

Tottenham could open their new shop, set to be the biggest football club store in Europe, at their new stadium on Tuesday. (Football London)

West Ham boss Manuel Pellegrini has backed Austria striker Marko Arnautovic to return to the form he showed to finish as the Hammers' top scorer last season. The 29-year-old is battling a knee injury that has left him on a limited training schedule. (Evening Standard)

Chelsea and England midfielder Ross Barkley, 24, has spent the past couple of years getting the tattoos on his left arm removed after admitting he went into getting them "too quick". (Times - subscription required) 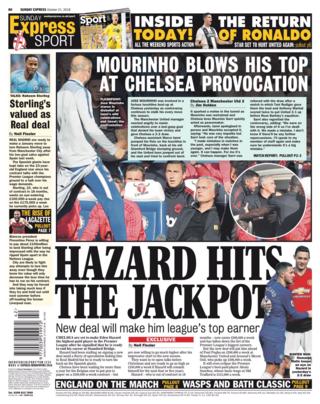 In the Daily Express, "Hazard hits the jackpot"