They face competition from Italian giants Juventus however, after the Turin club entered the chase for Ramsey. (Mail)

'His suicide came out of the blue'

Arsenal and Manchester United will face competition from Bayern Munich in their pursuit of Lille and Ivory Coast winger Nicolas Pepe, 23. (Bild, via Talksport)

Barcelona want 19-year-old Ajax and Netherlands defender Matthijs de Ligt as a replacement for Gerard Pique and 23-year-old Paris St Germain midfielder Adrien Rabiot, who is out of contract at the end of the season. (Mundo Deportivo via Mail)

The Football Association has called on England manager Gareth Southgate to shore up support for the sale of Wembley with a speech to its members. (Times)

Liverpool and England midfielder Adam Lallana, 30, will make his return from injury after the international break. (Times - subscription required)

Spain left-back Marcos Alonso, 27, is on the verge of signing a new contract at Chelsea. (Mirror)

Anthony Martial's goal against Newcastle on Saturday triggered a clause meaning Manchester United owe Monaco an additional £8.7m for the 22-year-old attacker, who they signed in 2015. (Telegraph)

Liverpool and Switzerland winger Xherdan Shaqiri says he is yet to visit the city centre after joining the club in the summer. (Blick, via Mail)

Leicester striker Jamie Vardy and his wife are set to follow in the footsteps of Winston Churchill and the Dalai Lama by speaking at the Oxford Union. (Sun)

Viewers of next season's Premier League matches on Amazon may be given the option of choosing an all-female commentary team. (Times - subscription required)

Chelsea want to combat anti-Semitism at Stamford Bridge by sending supporters on educational trips to Auschwitz instead of handing out bans. (Sun) 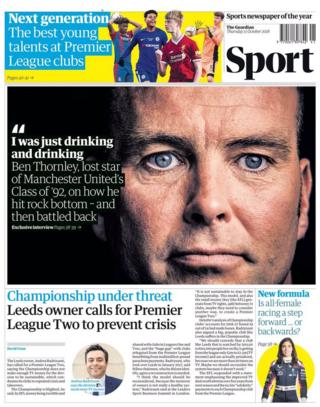 Guardian back page on Thursday