Manchester United bosses have urged Zinedine Zidane not to consider any other managerial vacancies while they decide on the future of manager Jose Mourinho. (Sunday Mirror)

Manchester United could have to pay £29m to Mourinho if they sack the Portuguese, but that figure would reduce to just £10m if he sees out the season and United fail to finish in the Champions League positions. (Sunday Mirror)

Mourinho revealed he received a text message as a vote of confidence from the Manchester United board before the 3-2 comeback win against Newcastle. (Sunday Times - subscription required)

Two days bordering on the unbelievable

Manchester City will have to break their transfer record to sign Lyon midfielder Tanguy Ndombele after the Ligue 1 club placed a £70m valuation on the 21-year-old France Under-21 international for the January transfer window. (Daily Star Sunday)

Former Arsenal striker Thierry Henry is emerging as the early favourite to take over at Aston Villa after initial talks with the club's hierarchy. (Sunday Telegraph)

Celtic boss Brendan Rodgers is thought to be interested in the Villa vacancy. (Daily Star Sunday)

Manchester United have told Paul Pogba he will not be sold in the January window, despite the 25-year-old France midfielder's reported wish to join Barcelona after they expressed interest in the summer. (Mail on Sunday)

Tottenham midfielder Mousa Dembele, 31, is not expected to discuss a new deal and the Belgium international is set to leave for free when his contract expires in the summer, with a move to China or the Middle East rumoured. (Sun on Sunday)

Arsenal could move for 28-year-old Porto captain Hector Herrera as a possible replacement for Wales midfielder Aaron Ramsey, 27, who is expected to leave the Emirates Stadium club in either in January or next summer. (A Bola, via Football London)

Wolves boss Nuno Espirito Santo says there is more to come from his side after they moved up to seventh in the Premier League table with a 1-0 win over Crystal Palace, extending their unbeaten run to six games. (Express and Star)

Former Manchester United forward Zlatan Ibrahimovic, now with LA Galaxy, is "prepared to talk" to AC Milan about a return to the Italian side, according to the 37-year-old Swede's agent Mino Raiola. (Sun on Sunday)

Bayern Munich boss Niko Kovac is fighting for his job after his side were beaten 3-0 at home by Borussia Monchengladbach. (Bild - in German) 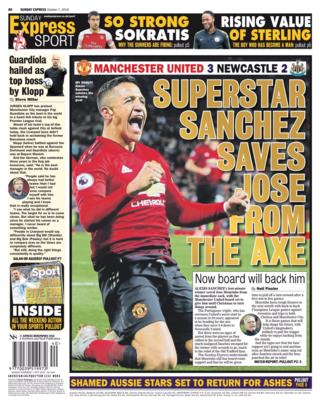 In the Sunday Express, Jose Mourinho will be given until Christmas to revive Manchester United's fortunes

Read more on GB's Evans fights back to advance

Read more on Chiefs to play 49ers in Super Bowl