Mourinho said he knew in the summer it would be a "very difficult" season for Manchester United. (Daily Star Sunday)

Manchester United and France midfielder Paul Pogba, 25, is hoping to push through a January move back to Juventus because of his deteriorating relationship with Mourinho. (Tuttosport, via Manchester Evening News)

Former Liverpool captain Graeme Souness says Manchester United midfielder Pogba is "only in the team to maintain his transfer value until United can sell him, because he doesn't merit his place for any other reason". (Sunday Times - subscription required)

Paris St-Germain forward Neymar, 26, would prefer a move to Arsenal or Chelsea if he ever moved to the Premier League as he "loves" London. (Sunday Express)

Tottenham midfielder Mousa Dembele, 31, could leave the club in January to join Chinese Super League side Beijing Sinobo Guoan on a three-year deal worth £192,000-a-week. (Sun on Sunday)

Spurs midfielder Eric Dier, 24, has defended the club not signing anyone in the summer transfer window and says they have a "fantastic squad". (Mail on Sunday)

'He's still got that magic wand'

Paul Scholes was back playing on Saturday - in England's 11th tier

England manager Gareth Southgate may not receive a knighthood because the government intends to block honours for people who avoid tax. (Sunday Times)

Southgate has ruled out the prospect of the England team doing a behind-the-scenes documentary similar to Manchester City's All or Nothing. (Sunday Telegraph)

West Ham midfielder Jack Wilshere is not good enough to make the England squad and Southgate says the 26-year-old has to start "playing well" if he wants an international recall. (Sunday Telegraph)

Arsenal boss Unai Emery is ready to play long-ball football, despite his preference for a short-passing game. (Sunday Mirror)

Manchester City owner Sheikh Mansour met a London club to discuss a potential deal before taking over at Etihad Stadium. (Mail on Sunday) 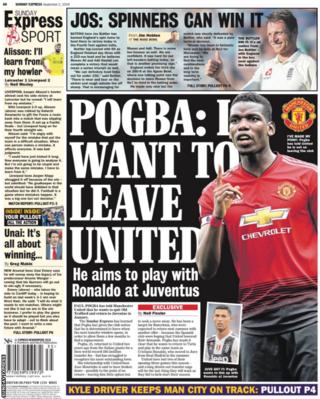