Manchester United players and staff believe manager Jose Mourinho is one defeat away from getting sacked. (Daily Mail)

Real are set to re-sign forward Mariano Diaz from Lyon by taking up a 22m euro (£19.9m) option on the 25-year-old. Sevilla had agreed a 35m euro (£31.8m) fee for the Dominican Republic international. (El Pais - in Spanish)

Barcelona still want to buy a central midfielder before their transfer window closes on Wednesday, but the club have ruled out signing Manchester United's 25-year-old France international Paul Pogba. (Sport - in Spanish)

How are they feeling after the Spurs loss?

Arsenal's French forward Alexandre Lacazette, 27, is considering his future at the Emirates. (Le10Sport - in French)

The Football Association is set to tell a government review that it is in favour of safe standing areas. (Times - subscription required)

Newcastle United manager Rafael Benitez says there has been no fall out between him and defender Jamaal Lascelles. (Goal)

Lascelles and Magpies winger Matt Ritchie had to be separated after an angry confrontation in training. (Mail)

Liverpool winger Sheyi Ojo, 21, is set to join French side Stade de Reims on loan for the rest of the season after the Englishman said he was interested in moving to Ligue 1. (Mirror)

Former Manchester City midfielder Yaya Toure, 35, is close to signing for a new club after the former Ivory Coast international passed a medical in London, his agent says. (Twitter)

Real Sociedad are interested in signing Everton's Spanish striker Sandro Ramirez. The 23-year-old moved to Goodison Park last summer but was sent out on loan to Sevilla. (Marca - in Spanish)

Barcelona defender Gerard Pique, 31, says he will never return to Manchester United. The Spaniard left Old Trafford for the Nou Camp in 2008. (Star)

Roma manager Eusebio di Francesco had to have surgery on his broken left hand after celebrating his side's equaliser against Atalanta on Monday. (Daily Mail)

La Liga is considering holding matches in Mexico as well as the game already proposed in the United States. (AS - in Spanish)

Chelsea's 32-year-old former England centre-back Gary Cahill wants to stay and fight for his place at the club. (Sun) 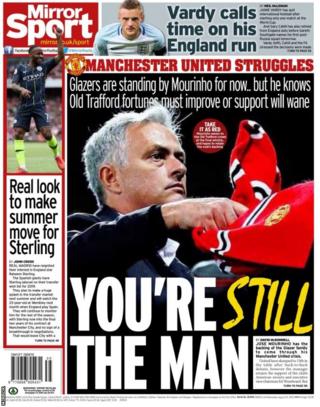