Manchester United manager Jose Mourinho has told friends he would have quit any other club by now. The Portuguese is said to be deeply frustrated by what he sees as a lack of backing from vice-chairman Ed Woodward. (Mirror)

Mourinho will be backed in the January transfer window, with Tottenham's Belgium defender Toby Alderweireld, 29, on United's agenda again. (Sun)

Actors Elba and Ameen take on Lawro in predictions...

Spurs' Danny Rose is a target for Paris St-Germain, who want to sign the 28-year-old England full-back before the European transfer window closes. (Mirror)

Real Madrid are still working on a marquee signing to replace Cristiano Ronaldo and believe they have a shot at signing Paris St-Germain's France striker Kylian Mbappe, 19. (Marca - via Metro)

The Spanish club now feel it is "almost impossible" to sign one of the Premier League's top strikers in this window, and are turning their attention to Valencia's Spanish forward Rodrigo, 27, in addition to Mbappe. (Independent)

Barcelona are preparing themselves for an £81m opening offer from Paris St-Germain for Croatia midfielder Ivan Rakitic, 30. (Sport - via Express)

Former Liverpool striker Iago Aspas, 31, is wanted by Real Madrid and the Spaniard could leave Celta Vigo in a £35m deal. (Super Deporte - via HITC)

Real Betis have made an official approach to take Manchester City's versatile 21-year-old Ukrainian Oleksandr Zinchenko on a season-long loan deal, with a view to a permanent transfer. (Mundo Deportivo - via Manchester Evening News)

Manager Marco Silva says Everton winger Ademola Lookman is "the present and the future of the club" in an attempt to dissuade RB Leipzig from continuing their chase for the 20-year-old Englishman. (Independent)

Former Arsenal striker Thierry Henry is hopeful he will be named Bordeaux manager after holding talks with the Ligue 1 club. (Guardian)

Tottenham made a £25m offer to sign Chelsea's English striker Tammy Abraham, 20, in the final hours of the summer transfer window. (Goal)

Aston Villa will look to finalise a loan deal for Abraham when they have concluded the signing of 29-year-old DR Congo winger Yannick Bolasie from Everton. (Birmingham Mail)

Manchester United do not have any players who would get into Jurgen Klopp's Liverpool team, says former Reds striker Dean Saunders. (Talksport) 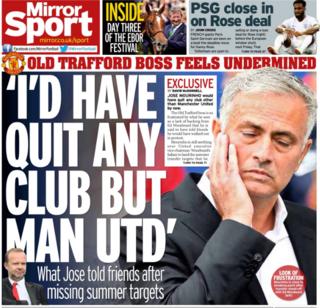