Barcelona have accepted Manchester United will not sell 25-year-old France midfielder Paul Pogba before the Spanish transfer window closes on 31 August - but will try to sign him next summer. (Sunday Express)

Manchester City have been told they must pay £68m for Borussia Dortmund's Germany midfielder Julian Weigl, with Paris St-Germain also interested in the 22-year-old. (France Football, via Sun on Sunday)

The crude, the bad and the ugly

A day to forget for Kenedy at Cardiff...

Benitez says English midfielder Isaac Hayden, 23, and Republic of Ireland defender Ciaran Clark, 28, will not be allowed to leave the Magpies on loan in the first half of the season. (Chronicle)

Liverpool are set to give Scotland defender Andrew Robertson, 24, a big pay rise after his impressive debut season at Anfield. (Sunday Mirror)

Liverpool manager Jurgen Klopp says the Reds have "no idea" how good their £52.75m Guinea midfielder Naby Keita, 23, can be. (Liverpool Echo)

Australia midfielder Daniel Arzani, 19, hopes his loan spell at Celtic will help to prepare him for making the breakthrough at Manchester City. (Manchester Evening News) 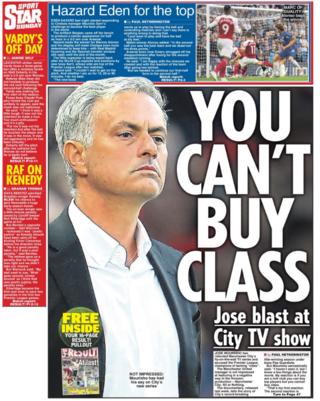 The back page of the Daily Star Sunday