AC Milan are targeting 23-year-old Chelsea's France midfielder Tiemoue Bakayoko on a season-long loan with a view to a permanent deal. (Sun)

Barcelona will pursue Paul Pogba after the European summer transfer window closes on 31 August after 'privately accepting' Manchester United will not sell the 25-year-old France midfielder this month. (Telegraph)

Liverpool goalkeeper Loris Karius, 25, is a target for Besiktas. The Turkish side are keen to sign the German on a season-long loan. (Sun)

Manchester City's England forward Raheem Sterling has yet to agree a contract extension with the club but manager Pep Guardiola says the club "are delighted with him and would like Raheem to stay". (Telegraph)

Sarri says he regrets not signing Gonzalo Higuain for Chelsea, but the 30-year-old Argentina striker says he joined AC Milan from Juventus because Sarri "was the only one who wanted me at Chelsea" whereas "at Milan everyone wanted me". (Star)

Tottenham's England attacking midfielder Dele Alli says the players "don't get caught up in what's going on" around the club after Spurs did not make any signings during the summer transfer window. (Mail)

Aston Villa boss Steve Bruce says midfielder Jack Grealish looked "every penny a £30m footballer" in his side's win over Wigan on Saturday in the wake of Tottenham failing in a £25m bid for the 22-year-old. (Mail)

Manchester City's 23-year-old centre-back Jason Denayer has refused to go out on loan as the Belgium defender wants a move to Turkish club Galatasaray. (Star)

Paris St-Germain midfielder Adrien Rabiot, 23, has turned down an offer to renew his contract with the Ligue 1 champions. The France player's current deal runs out at the end of the season. (L'Equipe - in French)

Who made Garth's Team of the Week?

Real Betis could make an offer for Inter Milan's Joao Mario. The Portugal midfielder, 25 made 14 appearances during a loan spell with West Ham United last season and played in the World Cup. (Mundo Deportivo)

Watford's French midfielder Abdoulaye Doucoure, 25, has indicated that he could move away from the club in the future. (Watford Observer)

Championship side Sheffield United may sign Oliver Norwood, 27, from Brighton and Hove Albion in January after negotiating a loan-to-buy agreement for the Northern Ireland midfielder. (Sheffield Star)

Scotland forward Ross McCormack, 31, and former England defender Micah Richards, 30, could be released from their contracts by Championship side Aston Villa. (Birmingham Mail)

Former Premier League referee Neil Swarbrick says it is "disappointing" there is no VAR in the top-flight this season, and that Everton defender Phil Jagielka deserved his red card for his tackle on Diogo Jota against Wolves. (Times - subscription required) 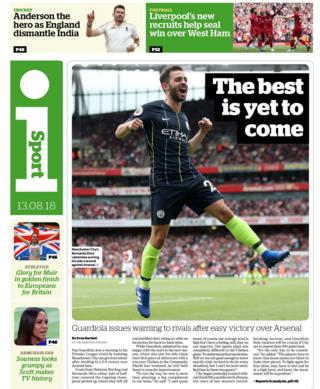 The i back page