Manchester United have made a £35m bid for Barcelona centre-back Yerry Mina and want an answer on Tuesday, with Everton and Lyon also interested in the 23-year-old. (Sun)

Leicester City are adamant that England's 25-year-old centre-back Harry Maguire, who has been linked with Manchester United, will not be leaving the club this summer. (Star)

Chelsea are in talks to sign Real Madrid midfielder Mateo Kovacic, with the 24-year-old having told the Spanish club that he wants to leave because he wants to play more first-team football. (Times - subscription required)

Chelsea will pay the £89m release clause in Jan Oblak's Atletico Madrid contract to sign the 25-year-old Slovenia goalkeeper as a replacement for 26-year-old Belgium international Thibaut Courtois, who is set to join Real Madrid. (Mundo Deportivo - in Spanish)

Chelsea are considering a £25m bid for Butland. (Star)

Birmingham City are set for 20% of the profit if Stoke sell the English goalkeeper this summer. (Birmingham Mail)

What do the stats say?

We look at some of the trends that might emerge this season, and attempt to bust a few myths

Tottenham and Kenya midfielder Victor Wanyama, 27, is a target for Roma. (La Repubblica, via Mirror)

Croatia midfielder Luka Modric, 32, is seriously considering leaving Real Madrid because he is tempted by a lucrative offer from Inter Milan. (La Sexta - in Spanish)

Real Madrid's 24-year-old Croatia midfielder Mateo Kovacic is refusing to train as he tries to force a move away from the Spanish club. (Marca)

Leicester are in talks with Dinamo Zagreb over a potential £13m deal for 21-year-old Croatian centre-back Filip Benkovic. (Mail)

Arsenal's 18-year-old English winger Reiss Nelson is set to be given a new long-term contract. (Sun)

Tottenham manager Mauricio Pochettino says England captain Harry Kane, 25, was disappointed with the amount of goals he scored at the World Cup, despite winning the Golden Boot. (Mail) 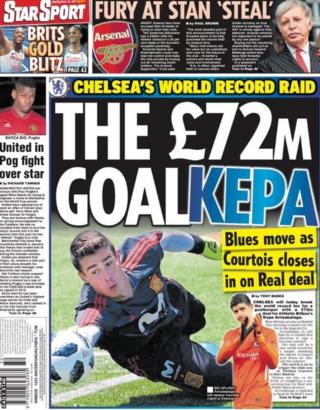