Manchester United are set to bid for Barcelona and Colombia centre-back Yerry Mina, 23, after failing in their attempt to sign 25-year-old Leicester City and England defender Harry Maguire. (Mirror)

Everton are not willing to match Barcelona's £35m valuation of Mina, and will instead move for Manchester United's Argentina defender Marcos Rojo, 28. (Goal)

How are Real Madrid and Gareth Bale lining up for the season?

Chelsea will risk losing 26-year-old Belgium goalkeeper Thibaut Courtois on a free transfer if they are unable to recruit a replacement before the transfer window closes on 9 August. (Mail)

Real Madrid and Croatia midfielder Mateo Kovacic, 24, will not join Manchester United because he does not want to play under Red Devils manager Jose Mourinho. (Marca)

West Ham have had a £27m bid for Uruguay striker Maxi Gomez rejected by Celta Vigo, who are demanding the 21-year-old's £35m release clause is met. (Mirror)

Serbia midfielder Sergej Milinkovic-Savic is staying at Lazio this season. The 23-year-old has been linked with Manchester United and Chelsea this summer. (Star)

The transfer of Argentina striker Gonzalo Higuain, 30, from Juventus to AC Milan is "just about" done, according to Milan's general manager Beppe Marotta. (Gazzetta dello Sport, via ESPN)

However, Chelsea are not giving up on signing Higuain, and could sell 31-year-old France striker Olivier Giroud to Marseille in order to finance a move. (Mirror)

Shrewsbury have put a £1m valuation on Congolese defender Toto Nsiala after rejecting a bid for the 26-year-old from Ipswich. (Mail) 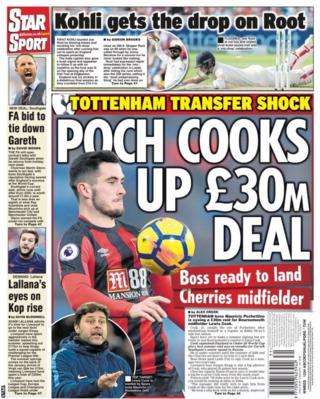