Inter Milan are interested in Real Madrid's Croatia midfielder Luka Modric, 32, who is on holiday in Italy. (Gazzetta dello Sport, via Mail)

However, Paris St-Germain are not giving up on signing Kante. (Mirror)

Tottenham want to sign Crystal Palace winger Wilfried Zaha for £45m. The Eagles have already turned down a bid from Chelsea for the 25-year-old Ivory Coast international. (Sun)

What is going on at Manchester United?

Is Jose Mourinho angling for an exit or just making a point?

Chelsea are not convinced Brazil winger Willian's late return to the club is because of passport issues. The 29-year-old, who interests Manchester United and Real Madrid is yet to report for pre-season training. (Times - subscription required)

Liverpool manager Jurgen Klopp wants to see more home-grown players come through the ranks and has been impressed with English midfielder Curtis Jones, 17, during pre-season. (Mail)

Defender Luke Shaw, 23, is happy to see out the final year of his contract at Manchester United, despite interest from German side Wolfsburg in the England international. (Mail)

Belgium forward Michy Batshuayi, 24, has been told by Chelsea manager Maurizio Sarri that he has a future at Stamford Bridge, amid interest from Crystal Palace and Valencia. (RMC, via Sun)

Juventus striker Gonzalo Higuain has agreed a season-long loan move to fellow Serie A side AC Milan, who will have the option to buy the 30-year-old Argentina international for £32m at the end of the season. (Guardian)

Sevilla president Jose Castro has made it clear he expects France midfielder Steven N'Zonzi to stay. The 29-year old is thought to be a target for Arsenal. (Metro)

Aston Villa want to sign Chelsea striker Tammy Abraham on a season-long loan but the 20-year-old English player is keen to stay in the Premier League. (Mail)

Newcastle offered manager Rafael Benitez to Spain for the World Cup after the sacking of Julen Lopetegui. (COPE, via Express)

The Football Association is fighting to keep hold of technical director Dan Ashworth, who is interested in a similar role at Premier League club Brighton. (Mirror)

Sampdoria are set to confirm the signing of Ronaldo Vieira, 20, from Leeds United after agreeing a five-year contract with the England Under-21 midfielder. (Yorkshire Evening Post) 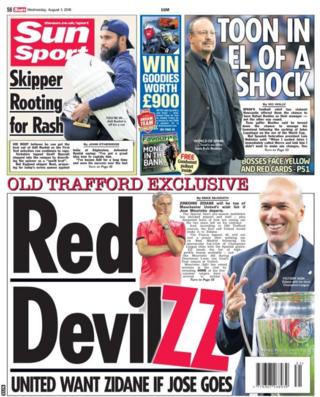