Barcelona have made a third bid to sign Chelsea's Brazilian winger Willian, 29, with an offer in excess of £55m. (Sky Sports)

Chelsea midfielder Cesc Fabregas, 31, says he is "speaking to Eden Hazard often" to try to keep his 27-year-old team-mate out of Real Madrid's hands. (Telegraph)

Real could also be about to make a bid for Tottenham defender Kieran Trippier following his impressive displays for England at the World Cup. The Spanish giants are among a host of English and European clubs keen on the 27-year-old. (Sun)

Paris St-Germain's Brazil forward Neymar, 26, has dismissed suggestions he is set to leave as Real Madrid step up their search for a replacement for Cristiano Ronaldo. (Marca)

Is Germany the future for the brightest young English players?

Manchester City goalkeeper Joe Hart could be on his way to Chelsea with the Blues considering a £5m bid for the 31-year-old. (Sun)

Crystal Palace are seeking £70m for Ivory Coast winger Wilfried Zaha, 25, who wants to leave the club and is being chased by Everton and Borussia Dortmund. (Sun)

Everton have made a £22m bid for Barcelona's 25-year-old defender Lucas Digne, with boss Marco Silva believing the France international could be Leighton Baines' long-term successor at Goodison Park. (Mirror)

West Ham and Newcastle are in talks with Atlanta United and Paraguay midfielder Miguel Almiron, 24, over a £10m move. (Sun)

West Brom winger James McClean is on the verge of joining Stoke. The 29-year-old Republic of Ireland international had a medical on Friday. (Sky Sports)

Manchester City midfielder Oleksandr Zinchenko, 21, says he is "so happy" to be part of Pep Guardiola's side despite Wolves making a £16m bid for the Ukraine international. Fulham and Newcastle are also interested in Zinchenko. (Express & Star)

Aston Villa have put Thierry Henry on a shortlist of candidates if the club's new Egyptian owners decide to replace Steve Bruce as manager. (Mail)

Arsenal's former England youth international Chuba Akpom is heading for the exit with a £2m return to Belgian side Sint-Truiden the likeliest move for the 22-year-old forward. (Independent)

Aston Villa midfielder Jack Grealish, 22, is edging closer to a move to Tottenham with the transfer of the Englishman expected to be completed by early next week. (Mirror)

Roma have made a £31.3m offer to Bordeaux to sign Everton target Malcom with the future of the 21-year-old Brazilian to be decided in the next 24-48 hours. (Sky Sports)

Fulham look set to sign Spanish keeper Fabri, 30, in £5m deal from Besiktas and have a £20m deal ready for Newcastle's Serbian striker Aleksandar Mitrovic, 23, who was on loan at the London club last season. (Sun)

AC Milan's Croatia forward Nikola Kalinic, 30, has refused his World Cup silver medal after being sent home from the tournament in disgrace. (Mirror)

Eight-time Olympic champion Usain Bolt, 31, is a target for US second-tier club Las Vegas Lights despite the Jamaican's wage demands being prohibitive. (ESPN) 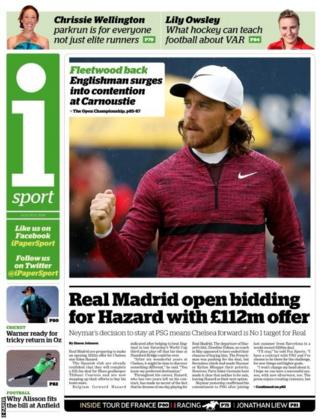