Real Madrid have put Chelsea and Belgium forward Eden Hazard, 27, at the top of their transfer list to replace Cristiano Ronaldo, who has joined Juventus. (Star)

The Blues remain in the race to sign Roma's Brazil goalkeeper Alisson despite Liverpool making a £62m bid for the 25-year-old. (Football Italia)

'I did not want to be a dead weight at Everton'

Wolves and Fulham are both interested in signing Manchester City's Oleksandr Zinchenko, 21, despite the Ukrainian left-back going on City's pre-season tour to the USA. (Mirror)

West Ham striker Marko Arnautovic could be on his way to Manchester United or Roma, with the Hammers open to offers for the 29-year-old Austrian. (TalkSport)

Former Real Madrid boss Zinedine Zidane, 46, will rejoin Juventus, the club the Frenchman played for between 1996 and 2001, as an advisor. (Libertad Digital in Spanish)

Newcastle United boss Rafael Benitez has been told he has to sell before he can strengthen his squad. (Mirror)

Porto are still keen on signing Newcastle defender Chancel Mbemba, 23, but are unwilling to meet the £8m asking price for the DR Congo international. (A Bola - in Portuguese)

West Brom have rejected a loan offer from Newcastle for Venezuelan striker Salomon Rondon, 28, who has a £16.5m release clause in his contract. (Express and Star)

Crystal Palace are closing in on the signing of Italian side Sassuolo's Senegal striker Khouma Babacar, 25, for £12m. (Mirror)

Crystal Palace and Bournemouth are interested in English forward Ollie Watkins, with Brentford demanding £15m for the 22-year-old they signed for £1.8m from Exeter a year ago. (London Evening Standard) 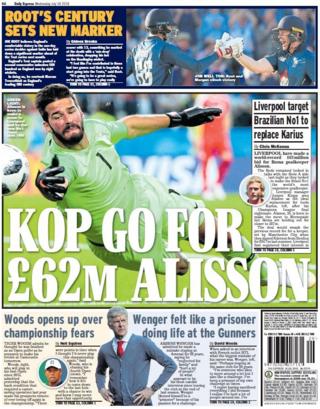