Manchester United midfielder Paul Pogba, 25, has been offered to Barcelona, with his agent telling the Spanish club the France international is unhappy with life under Jose Mourinho. (Mundo Deportivo, via Mail on Sunday)

Real Madrid are ready to make a £200m bid for Chelsea's 27-year-old Belgium forward Eden Hazard, who has hinted he wants to leave Stamford Bridge. (Mail on Sunday)

Real are also in advanced talks with the Blues' 26-year-old goalkeeper Thibaut Courtois, who is another Belgium international. (HLN, via Sunday Express)

Who makes your team of the World Cup?

Pick your star men, and share your team with friends...

Wales forward Gareth Bale, 28, will return to Real Madrid for pre-season training on Monday and expects key discussions over his future with new manager Julen Lopetegui. (Mail on Sunday)

Napoli are asking for £80m for 27-year-old Senegal defender Kalidou Koulibaly as they attempt to ward off Chelsea. (Sunday Mirror)

Arsenal's hopes of signing Portugal midfielder Andre Gomes, 24, have been given a lift after he was left behind from a pre-season trip with Barcelona. (Sport, via Sun on Sunday)

Tottenham and Belgium midfielder Mousa Dembele, 30, has rejected a move to Inter Milan but may still leave White Hart Lane this summer. (Sun on Sunday)

Burnley are aiming to push through a £12m deal for Swansea's English midfielder Sam Clucas, 27, before their Europa League campaign starts. Meanwhile, the Clarets have cooled their interest in West Brom's 28-year-old English defender Craig Dawson. (Sun on Sunday)

West Ham are looking to continue their transfer business this summer with a move for Shakhtar Donetsk's Brazilian forward Bernard, 25. (Ojoco, via 90min)

Cardiff City are interested in West Brom's Scotland winger Matt Phillips, 27, as are Middlesbrough and Newcastle. (Mail on Sunday)

United are among a number of clubs trying to sign England Under-17 midfielder Dylan Crowe. The 17-year-old has the offer of a professional contract from Ipswich.(Goal) 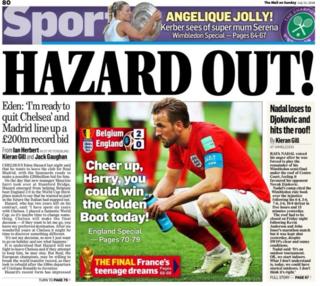