Chelsea have been offered a cash-plus-player deal by Barcelona for France midfielder N'Golo Kante, 27. Portugal midfielder Andre Gomes, 24, is the player Barca are willing to include. (Sky Sports)

Antonio Conte has been left "disgusted" by the way his sacking as Chelsea manager has been handled. (Telegraph)

Chelsea have held talks about a signing Juventus striker Gonzalo Higuain, 30, and want any deal for the Argentina international to involve Blues' Spain striker Alvaro Morata, 25, going the other way. (Mail)

Tottenham look set to miss out on Bordeaux forward Malcom, 21, with Inter Milan favourites to sign the Brazilian on an initial loan deal. (Times - subscription required)

Who makes your team of the tournament?

Pick your best team of the World Cup and share it with friends.

Leicester are ready to offer England defender Harry Maguire, 25, an improved contract - taking his weekly wage from £45,000 to about £75,000 - in an attempt to ward off interest from Manchester United. (Mail)

Lazio's Brazil midfielder Felipe Anderson, 25, is expected to complete a move to West Ham in the next few days, after having a medical on Friday. (London Evening Standard)

Paris St-Germain will offer Neymar an improved contract as they try to deter Real Madrid from making an offer for the 26-year-old Brazil forward. (AS)

Arsenal manager Unai Emery says Germany international Mesut Ozil is a "very important player" for the club and he wants the 29-year-old midfielder to come back with a "a good mentality" after his summer break. (Guardian)

Manchester United full-back Matteo Darmian could be set to return to Italy, with Inter Milan having made a loan offer for the 28-year-old Italian. (Mirror)

Kyle Bartley is expected to complete his move to West Brom in the next 24 hours after the Baggies agreed a £4m fee with Swansea for the 27-year-old English defender. (Express and Star)

Reports Watford have rejected a bid in excess of £20m from Everton for French midfielder Abdoulaye Doucoure, 25, are wide of the mark. (Watford Observer)

Brighton are keen to sign Mali midfielder Yves Bissouma from Lille, with Fulham also thought to be interested in the 21-year-old. (Argus)

Nigeria midfielder Wilfred Ndidi says he has never thought about leaving Leicester, and the club are set to offer the 21-year-old a new contract. (Leicester Mercury)

Premier League clubs are set to receive £30.75m as Fifa pay £6,460 per day in compensation for every player released for the tournament. (Mirror) 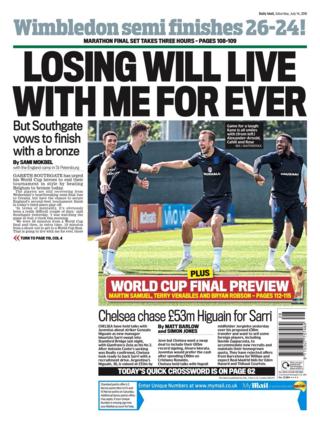