Antonio Conte's brother has hinted that the Italian will remain as Chelsea boss for the coming season, amid speculation over his future. (Mirror)

Who should start for England?

Pick your line-up for Wednesday's World Cup semi-final against Croatia...

Manchester City have agreed a £60m deal with Leicester for long-term target Riyad Mahrez, with the 27-year-old Algeria winger set to have a medical in the next 48 hours. (Mail)

Arsenal are in talks with Lorient about signing of 19-year-old France Under-20 midfielder Matteo Guendouzi. (Sky Sports)

Sampdoria's Uruguay midfielder Lucas Torreira is set to have a medical at Arsenal on Monday before his proposed move to Emirates Stadium and the 22-year-old says he is looking forward to a "great opportunity". (Metro)

Mesut Ozil's father has urged the Arsenal midfielder to end his Germany career after the 29-year-old came in for criticism during a disappointing World Cup. (Bild, via Talksport)

Ajax boss Erik ten Hag has confirmed the club are interested in re-signing 28-year-old Manchester United and Netherlands defender Daley Blind, who has struggled to make an impact at Old Trafford. (Sky Sports)

Everton and West Ham have joined the Gunners in the race to sign Sevilla and France midfielder Steven N'Zonzi, 29. (Le10 Sport - in French)

New Derby manager Frank Lampard has come in with a last-minute bid for West Ham central defender Reece Burke with the 21-year-old Englishman set to move to Hull City.(Sun)

Middlesbrough boss Tony Pulis is keen to sign Burnley and Wales striker Sam Vokes, 28, but DR Congo forward Britt Assombalonga, 25, could be on his way out of the club. (Northern Echo)

Liverpool have no interest in signing Aston Villa's 21-year-old English midfielder Jack Grealish, who is linked with a move away from the Championship side. (Liverpool Echo)

Former Sunderland, Aston Villa and Cardiff defender Kieran Richardson, 33, is training with West Brom as the Englishman looks to return to football after 18 months out. (Birmingham Mail)

Nice midfielder Jean-Michael Seri has been spotted in London with Chelsea, Arsenal and Fulham all interested in signing the 26-year-old Ivorian. (Star)

Some of England's players could miss the start of the Premier League season because of the side's run to the semi-finals of the 2018 World Cup. (Telegraph) 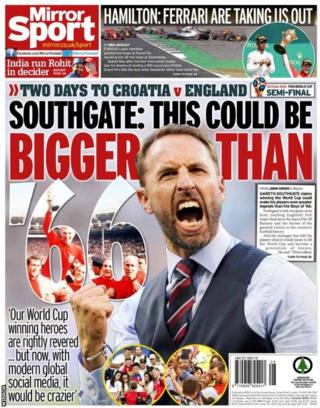 After England's win over Sweden on Saturday, thoughts now turn to the World Cup semi-final against Croatia and the Daily Mirror knows it will be a huge match