The Hammers are also set to finalise their move for 26-year-old England midfielder Jack Wilshere, who is a free agent after leaving Arsenal, on Monday. (Sunday Mirror)

Lyon president Jean-Michel Aulas still thinks France midfielder Nabil Fekir will line up for the club next season after the 24-year-old's move to Liverpool fell through. (Goal)

How did social media react to England's win?

Manchester United are confident of signing 29-year-old Chelsea forward Willian now Brazil are out of the World Cup. (Sun on Sunday)

However, Barcelona's Argentina forward Lionel Messi is keen to link up with Willian at the Nou Camp. (Manchester Evening News)

United States defender Erik Palmer-Brown, 21, has gone on loan from Manchester City to Eredivisie side NAC Breda for the new season. (ESPN)

Defender Kieran Tierney, 21, is set to remain at Celtic with Everton deciding against meeting the £25m asking price for the Scotland international. (Scottish Sun)

Lyon have told Chelsea that midfielder Tanguy Ndombele, 21, will not be sold this summer as the Blues seek a potential replacement for 27-year-old fellow Frenchman N'Golo Kante, who is Paris St-Germain's prime target this summer. (Sunday Express)

Rangers will have first refusal on any youngsters being sent out on loan by Liverpool after a deal put together by the respective managers Steven Gerrard and Jurgen Klopp. (Sun on Sunday)

Manchester United are targeting Barcelona's 16-year-old Spanish midfielder Nico Gonzalez, who has yet to agree a new contract with the La Liga champions. (Sport) 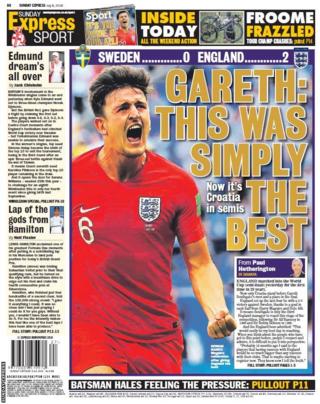 After England's win over Sweden, goalscorer Harry Maguire features on Sunday's newspaper back pages, including the Sunday Express