Monaco will consider offers for France midfielder Thomas Lemar this summer. Arsenal and Liverpool have both been linked with the 22-year-old. (Telefoot via Team Talk)

LA Galaxy striker Zlatan Ibrahimovic says the chance of him playing for Sweden in this year's World Cup in Russia is "sky high", despite the 36-year-old retiring from international football in 2016. (Sun)

Former West Brom player Derek McInnes and ex-Baggies boss Tony Mowbray are among the favourites to be named the club's new manager. (Mirror)

The anatomy of a Man City goal...

Roma president James Pallotta says the club have "no intention of selling" 25-year-old Brazilian goalkeeper Alisson, who has been linked with a move to Liverpool. (Express)

Chelsea's Germany defender Antonio Rudiger, 25, says he has "no idea" why he did not play against Southampton, adding that he was "fully fit" for Saturday's match. (Mirror)

Newcastle are set to sign goalkeeper Martin Dubravka permanently. The 29-year-old Slovakian joined the Magpies on loan from Sparta Prague in January. (Express)

Newcastle boss Rafael Benitez will seek talks with owner Mike Ashley before signing a new contract. The Spaniard wants to ensure there is enough money for summer signings before committing to the club. (Telegraph)

Manager Jose Mourinho says Manchester United will not "do anything crazy" during the summer transfer market. (Sky Sports)

Arsenal, Chelsea, Liverpool, Manchester City, Manchester United and Tottenham are set to resume their attempt to secure more of the money from the Premier League's overseas television rights. (Mail)

Liverpool's Egyptian forward Mohamed Salah, 25, says winning the Champions League is more important to him than finishing as the Premier League's top scorer and claiming the Golden Boot. (Guardian)

Former Wolves striker Steve Bull only belatedly realised the club had been promoted to the Premier League on Saturday and says the side's passing game has him "shaking my head every time I see the team now thinking, this isn't Wolves". (Times - subscription required) 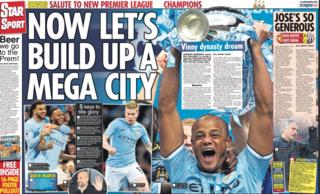