Manchester City will move for Paris St-Germain's 18-year-old forward Kylian Mbappe if the Ligue 1 club are found to have broken Financial Fair Play rules. The France international joined PSG on a season-long loan from Monaco in August. (Sunday Mirror)

Celtic boss Brendan Rodgers is on a four-man shortlist to be Antonio Conte's replacement at Chelsea, where he managed the youth and reserve teams. (Sunday Express)

Ups, downs & the race for Europe

All you need to know about the battles for promotion and relegation in England and Scotland...

Liverpool are set to sign England Under-17 striker Bobby Duncan, who is the cousin of former captain Steven Gerrard and involved in the Manchester City academy set-up. (Sun on Sunday)

Gerrard, who runs Liverpool's Under-18 team, has emerged as a candidate to replace Mick McCarthy at Ipswich. (Sun on Sunday)

Everton will link up with agent Mino Raiola to improve their recruitment in the summer. The change of personnel will also see the departure of manager Sam Allardyce and director of football Steve Walsh. (Sunday Mirror)

Allardyce says his time at the club has already been a success, after Saturday's 1-1 draw at Swansea saw then move to ninth in the Premier League. (Sky Sports)

Juventus are close to agreeing a deal to sign 28-year-old Italian defender Matteo Darmian from Manchester United. (Tuttosport, via Sun on Sunday)

Bordeaux winger Malcom has said Paris St-Germain is his dream club. The 21-year-old Brazilian was previously linked with a move to Tottenham. (Le10Sport - in French)

Arsenal manager Arsene Wenger says he has always wanted Egyptian midfielder Mohamed Elneny to stay with the club, adding the 25-year-old is starting to show his best form. (Independent)

Stoke boss Paul Lambert is convinced his 19th-placed side can avoid relegation if they emulate the work ethic of his roofer father, Billy. (Times) 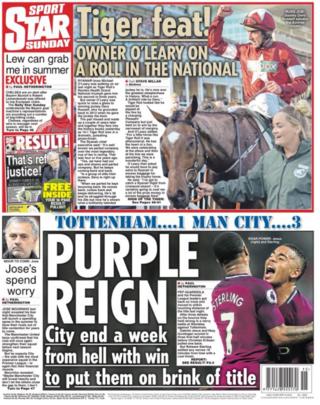