Manchester United midfielder Ander Herrera does not know if he will renew his deal at Old Trafford. The Spaniard, 28, is contracted to the Premier League side until 2019. (Mundo Deportivo - in Spanish)

BBC pundits pick their player of the year...

Gareth Bale was unhappy to be substituted at half-time in Real Madrid's Champions League quarter-final second leg at home to Juventus, but the 28-year-old Wales forward still wants to stay at the La Liga club. (Mail)

Barcelona manager Ernesto Valverde has defended Lionel Messi after the 30-year-old was criticised following their Champions League exit. He also denied being confronted by the Argentine and defender Gerard Pique, 31, after the game. (Express)

Manchester City could be prepared to share Etihad Stadium with Manchester United if plans to redevelop Old Trafford went ahead. (Sun)

Chelsea boss Antonio Conte says he is not the only one to blame for the club's faltering season as mistakes have been made by "me, my staff, the players and the club". (Mirror)

Arsenal manager Arsene Wenger's future at the club could depend on his side beating Atletico Madrid in the Europa League semi-finals. (Telegraph)

Gunners striker Alexandre Lacazette, 26, believes that winning the Europa League can save Arsenal's season and help keep Wenger at the club. (Sun)

Newcastle are interested in Sunderland's Swedish striker Joel Asoro, 18, and 19-year-old English forward Josh Maja. Both players are out of contract at the Stadium of Light next summer. (Mail)

Magpies boss Rafael Benitez has 12 months left on his Newcastle contract and has hinted he could be ready to extend that and stay at the club. (Express)

Benitez says Newcastle will be "exceeding expectations" if they finish 10th this season. (Northern Echo)

Everton manager Sam Allardyce insists there are no problems between him and former England forward Wayne Rooney.

Chelsea's Belgian playmaker Eden Hazard, 27, says he has been unhappy with his recent form. (Evening Standard)

Fifa is proposing to revamp the Club World Cup, turning it into a competition held once every four years featuring 31 matches. (Reuters) 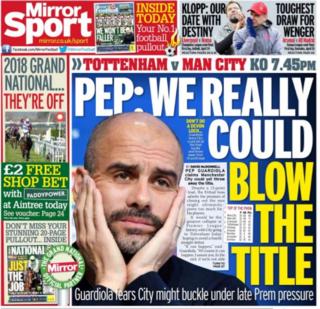 The back page of Saturday's edition of the Mirror