Tottenham are lining up West Ham's 24-year-old French left-back Arthur Masuaku as they prepare for the departure of their 27-year-old England international Danny Rose. (Sun)

Real Madrid's Gareth Bale, 28, taken off by Zinedine Zidane at half-time in the Champions League quarter-final against Juventus, expects to remain at the club next season. (Sun)

Spurs manager Mauricio Pochettino says 23-year-old English striker Harry Kane has been hurt by criticism of his decision to claim the side's second goal at Stoke by appeal. (Telegraph)

Chelsea are considering Napoli boss Maurizio Sarri as a replacement for Antonio Conte this summer. (Mirror)

Barcelona will not rush into new contract negotiations with their 24-year-old French defender Samuel Umtiti. (Mundo Deportivo - in Spanish)

A steward at Torino had to have his spleen removed after being hit by a free-kick. (Sport Mediaset - in Italian)

Zlatan Ibrahimovic has invited his former Manchester United team-mates to a lavish party at his new Los Angeles base. (Sun)

Manchester United are likely to put plans to increase Old Trafford's capacity to 88,000 on hold because there is no feasible temporary home, with Manchester City's Etihad Stadium not expected to be an option. (Express)

Sunderland manager Chris Coleman has defended a decision to limit tickets for home matches to guard against Newcastle fans attending in order to gloat over the club's likely relegation from the Championship. (Northern Echo)

Tottenham's 22-year-old English midfielder Harry Winks is being treated by specialists in Qatar as he looks to recover from an ankle injury. (Evening Standard)

South America football's governing body has asked Fifa to expand the 2022 World Cup in Qatar so 48 teams can compete. (ESPN)

Premier League clubs are set to reject the introduction of video technology for next season. (Telegraph) 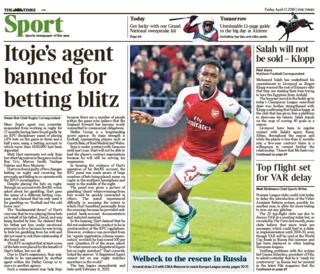 Times back page on Friday