Manchester United forward Anthony Martial, 22, has turned down a new five-year contract and wants to leave this summer. (RMC Sport - in French)

Martial would like to stay but manager Jose Mourinho could deem him surplus to requirements, with Juventus, Paris St-Germain and Atletico Madrid all interested in the France striker. (Independent)

Tottenham and Inter Milan are also keen on Martial if he is told he can leave Old Trafford. (Telegraph)

Atletico Madrid are ready to offer Antoine Griezmann a deal in excess of £300,000 a week to prevent the 27-year-old France forward leaving this summer. (Mirror)

'We came through the whirlwind'

How Liverpool beat Man City in the Champions League quarter-finals

Juventus chief executive Giuseppe Marotta says he wants Liverpool and Germany midfielder Emre Can, 24, to decide whether or not he is joining the Serie A club in the next 10 days, amid rival interest from Real Madrid and Bayern Munich. (Tuttosport - in Italian)

PSG are nearing a final decision on who will replace manager Unai Emery next season after meeting with former Borussia Dortmund boss Thomas Tuchel's representatives. Chelsea boss Antonio Conte is the other frontrunner. (Guardian)

Wales forward Gareth Bale, 28, is not leaving Real Madrid this summer, despite recently being dropped for several crucial matches, says his agent. (ESPN)

Aston Villa's 25-year-old keeper Sam Johnstone, who is on loan from Manchester United, has suggested he will soon leave Old Trafford permanently and could settle at Villa Park. (Guardian)

Norwich could be forced to sell 21-year-old midfielder James Maddison this summer amid interest from Liverpool and Tottenham. (Mirror)

Watford have ended their interest in Stevenage and England Under-19 defender Ben Wilmot, with Arsenal and Tottenham still competing to sign the 18-year-old. (Sun)

Forward Reiss Nelson, 18, is hoping to sign a new contract at Arsenal after making his first Premier League start in Sunday's victory over Southampton. (Sky Sports)

Italian football writer James Horncastle says manager Antonio Conte will struggle to get a top job this summer if he was to leave Chelsea at the end of the season. (BBC Radio 5 live)

Former Liverpool and Chelsea striker Fernando Torres is likely to join a club in Major League Soccer or the Chinese Super League when he leaves Atletico Madrid at the end of the season, says the 34-year-old Spaniard's agent. (Radio Marca, via Goal.) 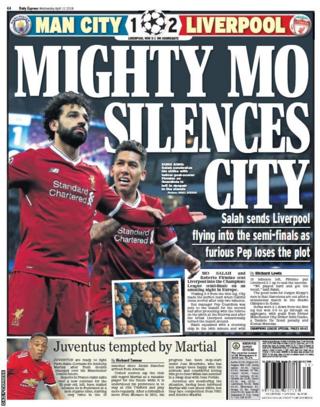