Manchester United forward Marcus Rashford, 20, is becoming disillusioned at his lack of action at Old Trafford - and the England international may leave next season. (Mirror)

Chelsea manager Antonio Conte's job is under threat again, and the Italian could leave his role before the end of the season. (Mail)

Chelsea do not plan to terminate Conte's contract until the end of the season, but their hopes the Italian will be offered a job by Paris St-Germain could be thwarted by Thomas Tuchel taking charge of the French club. (Times - subscription required)

Liverpool are not interested in signing 30-year-old midfielder Marouane Fellaini from Manchester United, but PSG remain interested in the Belgium international. (Mail)

'The shackles will be off'

Why Man City should keep believing against Liverpool...

Bundesliga champions Bayern Munich and Ligue 1 leaders PSG have both asked Chelsea to keep them informed if 22-year-old winger Kenedy becomes available for transfer. The Brazilian is on loan at Newcastle. (Sky Sports)

West Ham striker Javier Hernandez, 29, is ready to leave the club this summer as the Mexican is in search of regular first-team football. (Mirror)

Watford have beaten Arsenal and Tottenham to the £1.5m signing of England youth international Ben Wilmot, 18, from League Two side Stevenage. (Sun)

West Brom could lose 28-year-old striker Salomon Rondon if they are relegated because the Venezuelan has a £16.5m release clause in his contract. (Mirror)

Real Madrid forward Gareth Bale has been criticised by the club's former striker Jorge Valdano, despite providing the cross for Cristiano Ronaldo to score in the 1-1 draw with Atletico Madrid. (El Transistor via Star)

Newcastle midfielder Jonjo Shelvey believes he is in the kind of form which first earned him an England call-up. (Star) 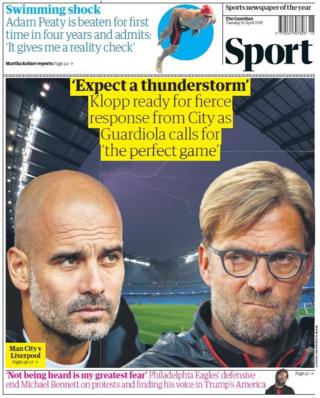