Manchester City believe they can sign Real Madrid's Spain midfielder Isco this summer. A deal for the 25-year-old could be worth £75m. (Mirror)

Chelsea and Tottenham have also shown interest in Isco. (Sun)

Arsenal have made central midfield and central defence their transfer priorities this year amid increasing uncertainty over the future of England midfielder Jack Wilshere, 26. (Telegraph)

Belgium midfielder Mousa Dembele, 30, will not sign a new contract at Tottenham before this summer's World Cup, casting doubt on his future at the club. (Telegraph)

Bayern Munich striker Robert Lewandowski, 29, will force through a move to Real Madrid this summer. Chelsea's 25-year-old Spain forward Alvaro Morata is one of the strikers the German giants are lining up as a replacement if they lose the Pole. (AS - in Spanish)

Paris St-Germain midfielder Hatem Ben Arfa has announced he will leave the Ligue 1 side at the end of the season. The 31-year-old Frenchman has been linked with Leicester City. (Sun)

West Ham are confident of signing Russia captain Fyodor Smolov. The 28-year-old striker, who plays his club football for Krasnodar, could move for £15m. (Mirror)

The Premier League is to explore the option of cutting referees out of the VAR process, instead relying solely on the video official. (Times - subscription required)

Manchester United have introduced a heavily discounted season ticket for 16 to 25-year-olds in a bid to improve the atmosphere at Old Trafford. (Telegraph)

Liverpool will step up contract talks with 17-year-old England Under-17 World Cup winner Rhian Brewster. The striker is attracting interest from Premier League and overseas clubs and his current deal runs out in the summer. (Sun)

Manchester City boss Pep Guardiola has been criticised by a former Bayern Munich doctor, who says the Spaniard put success ahead of players' health. (Mail)

Belgium manager Roberto Martinez has warned Tottenham's 29-year-old defender Toby Alderweireld his place in the World Cup squad is under threat if he remains out of favour under Mauricio Pochettino. (Guardian)

Crystal Palace winger Andros Townsend, 26, says that while he is targeting an England recall, helping the Eagles avoid relegation is a bigger priority. (Mirror)

Cardiff City boss Neil Warnock has labelled himself "a big softie", saying: "I cry my eyes out when I watch Call the Midwife." (Mail)

Lee Bowyer says he was too competitive as a player at times but is desperate to impress as Charlton Athletic caretaker boss. (Express)

Arsenal's French centre-back Laurent Koscielny, 31, has taken up yoga in an attempt to prolong his playing career. (Sun)

England left-back Luke Shaw, 22, challenged Jose Mourinho over the way Manchester United's manager was treating him during a heated dressing-room row at Old Trafford at half-time in the FA Cup win over Brighton. (Mail) 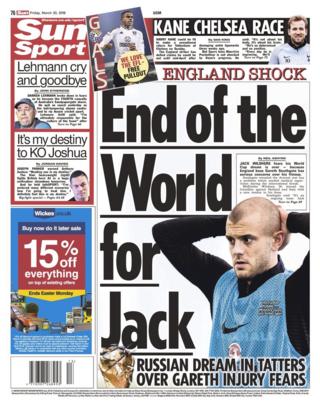