Manchester City forward Gabriel Jesus, 20, has turned down a £90,000-a-week offer from the Premier League leaders and the Brazilian will wait until the summer to discuss new terms. (Mail)

Chelsea's Spanish defender Marcos Alonso, 27, says he has not considered leaving the Blues amid speculation about his future at Stamford Bridge. (Marca)

The Britons keeping their dreams alive in Sweden

Everton have set their sights on Shakhtar Donetsk's Portuguese manager Paulo Fonseca, 45, as a replacement for current boss Sam Allardyce. The Toffees are believed to want a younger man at the helm. (Mirror)

Arsenal manager Arsene Wenger is angry with England for the way they "managed" midfielder Jack Wilshere, 26, during his time on international duty. Wilshere was injured in training but is expected to be fit for Stoke's visit to the Emirates on Sunday. (Star)

Barcelona's France centre-back Samuel Umtiti, 24, refused to answer a question about joining Manchester United this summer as he holds discussions with the Catalans about a new contract. (Mirror)

England will only have one opportunity to play with the official World Cup Adidas football before this summer's tournament because of the FA's commercial commitments to Nike. (Times)

New Wales manager Ryan Giggs banned his team from playing golf during their trip to China because he feared they might get injured. (Sun)

Norwich have put a £25m price-tag on their England U21 midfielder James Maddison, with Tottenham, Chelsea, Everton and Manchester City all interested in signing him this summer. (Mirror)

Newcastle have been scouting Besiktas midfielder Oguzhan Ozyakup, 24, with a view to signing the Turkey international on a free in the summer. (Turkish-Football.com)

Aston Villa striker Gabby Agbonlahor, 31, will end his 17-year association with the club this summer, even if they are promoted to the Premier League. (Telegraph)

Championship side Derby are to sue their former chief executive Sam Rush for £7m, with the claim relating to transfer fees and player wages during his time at the club. (Mail) 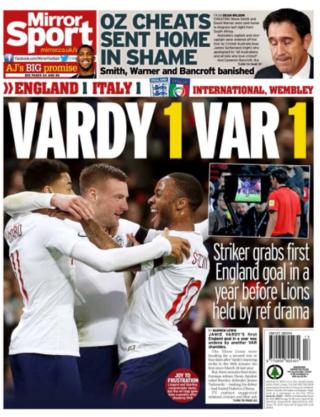