Pogba and Manchester United manager Jose Mourinho are barely on speaking terms after the France international was dropped by his club last month. (Sun on Sunday)

Mourinho does not think 'player power' will get him the sack at Old Trafford. (Mail on Sunday)

Paris St-Germain have opened talks with Antonio Conte's representatives about the Italian manager moving to the French capital from Chelsea this summer. (Guardian)

Liverpool and Egypt forward Mohamed Salah, 25, is ready to rebuff Real Madrid and is expected to be offered a £200,000-a-week contract at Anfield. (Sunday Mirror)

Former Borussia Dortmund coach Thomas Tuchel has turned down the Bayern Munich job because he is in negotiations with Arsenal. (Bild - in German)

The forgotten story of a football pioneer and war hero

The powerful story of Walter Tull

Arsenal and Chelsea are set to rival each other in their attempts to sign Atletico Madrid's Slovenian keeper Jan Oblak, 25. (Sunday Express)

Hector Bellerin's agent says the Spain defender is happy at Arsenal and no offer has been made for the 23-year-old. (CRC via Sky Sports)

West Ham are looking into appointing former Manchester City boss Manuel Pellegrini as their manager for next season. (Sun on Sunday)

Albanian defender Elseid Hysaj has told Napoli a club is prepared to meet his 50m euro (£43.7m) release clause. The 24-year-old is a target for both Arsenal and Manchester United. (Tuttosport via Talksport)

Barnsley full-back Andy Yiadom, 26, is not considering a move to Leeds United, or anywhere else, until the Tykes are safe from relegation. (Leeds Live)

Croatian former QPR and Tottenham midfielder Niko Kranjcar, 33, says he has "options on the table" after leaving Scottish Premiership side Rangers. (GetWestLondon)

Manchester United say the reason Chile forward Alexis Sanchez was pictured eating alone at the club's training ground was that he had stayed on for extra shooting practice. (Star on Sunday)

Manchester City winger Leroy Sane has been clocked as the fastest player in the Premier League this season and also the quickest since such records began in 2013-14. (Mail on Sunday)

England striker Jamie Vardy, 31, failed to get a touch after coming on as a late substitute against the Netherlands but hopes to start against Italy on Tuesday. (Guardian)

At least one England player is thinking of hiring his own security firm to travel with his family to this summer's World Cup in Russia. (Telegraph)

Tottenham's Belgium defender Jan Vertonghen says the "semi-finals are a realistic goal, and then hopefully more" for his country, who are in the same group as England, at the World Cup. (Telegraph) 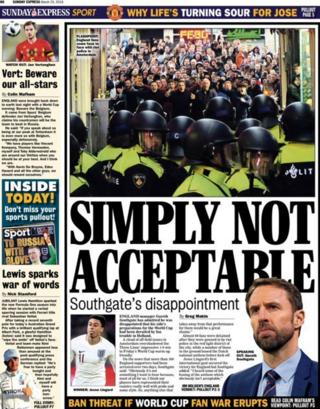