Manchester City and Manchester United will both try to sign Neymar if the 26-year-old Brazil international decides to leave Paris St-Germain. Real Madrid are also interested and Neymar has not ruled out any options, but PSG remain keen to keep hold of him. (Mundo Deportivo - in Spanish)

Gareth Bale will leave Real Madrid to join Manchester United this summer if Zinedine Zidane stays in charge of the Bernabeu club. (Mirror)

But Real Madrid forward Bale has been told by Wales manager and ex-Manchester United winger Ryan Giggs to stay at the Spanish club rather than move back to the Premier League. (Express)

Manchester United striker Marcus Rashford, 20, has emerged as a potential target for Real Madrid this summer. (Sport via Mail)

Belgium manager Roberto Martinez does not believes Chelsea manager Antonio Conte's use of forward Eden Hazard in a false nine position is getting the best out of the 27-year-old. (Express)

Fulham's 17-year-old winger Ryan Sessegnon could reject moves to big Premier League clubs if they gain promotion from the Championship this season. (Sun)

The Premier League will test VAR at every match next season and plans to introduce use of the technology in full for 2019-20. (Times - subscription required)

The forgotten story of a football pioneer and war hero

The powerful story of Walter Tull

West Ham forward Manuel Lanzini, 25, has played down a move away from the club by saying he is "very happy" with the London Stadium outfit. (West Ham website)

Manchester United are considering a £40m bid for Bayern Munich's 27-year-old Brazil winger Douglas Costa, who is on loan at Juventus. (Mirror)

The raised pedestrian bridge which has carried millions of fans into Wembley over almost half-a-century is to be demolished. (Times - subscription required) 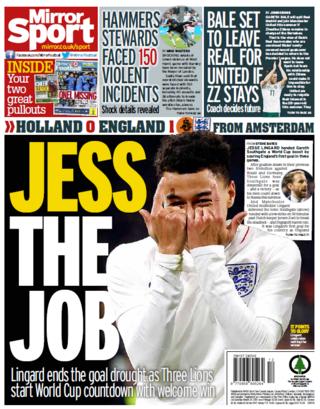 Mirror back page on Saturday