Manchester United are concerned that Chile forward Alexis Sanchez, 29, is struggling to settle at the club and fear a repeat of the circumstances around Paris St-Germain and Argentina winger Angel di Maria's brief spell at Old Trafford. (Mail)

England coach Gareth Southgate has banned his players from eating Starbucks food - and having syrup in their cappuccinos - at the team hotel's cafe. (ESPN)

West Ham United are in a fresh legal dispute with London Stadium's landlords over who should pay for a series of costs including providing draught beer, Sky TV and hospitality staff. (The Times - subscription required)

Tottenham are resigned to losing Belgian defender Toby Alderweireld, 29, this summer but will demand 50m euros (£44m). (HLN - in Dutch)

Liverpool are yet to make a move for Roma goalkeeper Alisson, 25, but the Brazilian is not close to signing a new deal at the Italian club. (Sun)

Chelsea's French midfielder N'Golo Kante, 26, has played down speculation about him joining Paris St-Germain by saying he is "at home" at Stamford Bridge. (Express)

Jack Wilshere will give Arsenal every chance to offer him the deal which will keep him at the club - the outcome which is the 26-year-old midfielder's preferred option. (Sun)

The agent of Manchester United forward Anthony Martial, 22, has given no assurances over the France international's future at the club. (Il Bianconero, via Independent)

The footballer intent on giving back after his brother's death

Real Madrid forward Cristiano Ronaldo says self-confidence is the key to his success. The 33-year-old Portugal international has scored 21 times in 13 appearances since the start of 2018. (Sky Sports)

Manchester City midfielder Yaya Toure did not turn up for the first day of training with his Ivory Coast team-mates on Tuesday. (Fifciv.com)

Liverpool boss Jurgen Klopp has given his non-international players a week off and has taken his coaching staff to Tenerife. (Liverpool Echo)

Manchester United striker Zlatan Ibrahimovic could be in trouble with the Football Association over his involvement with a new betting company. (Mirror)

Liverpool will not sell forward Mohamed Salah, 25, this summer and the Egyptian does not have a release clause in this contract. (ESPN)

Vodafone Egypt will give all of its phone customers 11 minutes of free call time every time Salah scores. (Mirror) 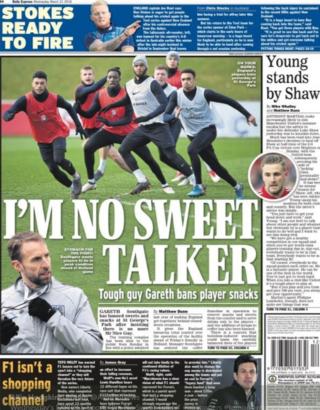 Barcelona, Paris St-Germain and Real Madrid are all interested in signing Liverpool forward Mohamed Salah, 25, for £200m. The Egypt international has scored 28 Premier League goals so far this season. (Sun)

Liverpool will resist any attempts by clubs to sign Salah as the Anfield club target winning the Premier League next season. (Times - subscription required)

Shaw will not be forced out of Manchester United this summer and could see out the final year of his contract before leaving on a free transfer during summer 2019. (Guardian)

Chelsea are leading the chase for Shaw, who is a boyhood Blues fan, if he decides to leave Manchester United this summer. (Mail)

Senior figures at United are becoming increasingly worried by manager Mourinho's treatment of Shaw and the impact it is having on the left-back's transfer value. (Telegraph)

Tottenham are set to go back to Crystal Palace with a £40m bid for winger Wilfried Zaha, 25, but the Eagles believe he is worth more. (Mail)