Barcelona, Paris St-Germain and Real Madrid are all interested in signing Liverpool forward Mohamed Salah, 25, for £200m. The Egypt international has scored 28 Premier League goals so far this season. (Sun)

Liverpool will resist any attempts by clubs to sign Salah as the Anfield club target winning the Premier League next season. (Times - subscription required)

Shaw will not be forced out of Manchester United this summer and could see out the final year of his contract before leaving on a free transfer during summer 2019. (Guardian)

'Amid chaos at Blackpool, the brilliant youth team are caught in the crossfire'...

Chelsea are leading the chase for Shaw, who is a boyhood Blues fan, if he decides to leave Manchester United this summer. (Mail)

Senior figures at United are becoming increasingly worried by manager Mourinho's treatment of Shaw and the impact it is having on the left-back's transfer value. (Telegraph)

Tottenham are set to go back to Crystal Palace with a £40m bid for winger Wilfried Zaha, 25, but the Eagles believe he is worth more. (Mail)

Arsenal have identified Bayer Leverkusen keeper Bernd Leno as a successor to Petr Cech and are planning a £25m move for the 26-year-old. (Sun)

Newcastle United manager Rafael Benitez has one year left on his contract and will assess whether he wants to stay at the end of the season. (Telegraph)

Bosnia forward Edin Dzeko's proposed transfer to Chelsea in January collapsed after Roma pulled out of the deal for the 32-year-old. (Radio Rai, via Metro)

Bayern Munich head coach Jupp Heynckes has ruled out a move for Bordeaux forward Malcom, 21. The Brazilian has been linked with Tottenham and Arsenal. (Evening Standard)

Liverpool striker Roberto Firmino says the Reds had to change the way they played following the January sale of fellow Brazilian Philippe Coutinho to Barcelona. (Goal)

The Football Association is set to make it mandatory for all England teams to have an ethnic minority coach as a member of their staff. (Times - subscription required)

A transfer study claims Tottenham and England striker Harry Kane would be worth more in profit to the north Londoners than Lionel Messi would be to Barcelona. (Express)

Barcelona forward Lionel Messi has revealed he no longer vomits during matches because he avoids chocolate and fizzy drinks. (Goal)

Portuguese forward Cristiano Ronaldo apparently had a bet with his Real Madrid team-mates that he would win La Liga's Golden Boot - when Messi was 11 goals ahead of him. (Marca)

Brazil will use Tottenham's training facilities as part of their preparation for this summer's World Cup in Russia. (Evening Standard) 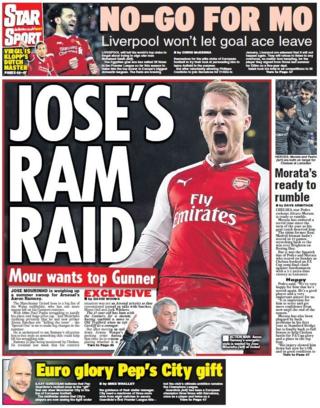 Tottenham, Leicester and former club Southampton are all interested in signing Luke Shaw, who was taken off at half-time in the 2-0 FA Cup quarter-final win over Brighton on Saturday, if he leaves Manchester United. (Star)

Some Manchester United players believe 22-year-old Shaw, who has been capped seven times by England, is being "bullied" by manager Jose Mourinho after being singled out for criticism following the Brighton game. (Telegraph)

Stoke midfielder Charlie Adam, 32, has apologised to manager Paul Lambert and his team-mates for his sending off against Everton but the Potters boss has warned his relegation-threatened players that they "can't keep making mistakes". (Times - subscription required)