Tottenham, Leicester and former club Southampton are all interested in signing Luke Shaw, who was taken off at half-time in the 2-0 FA Cup quarter-final win over Brighton on Saturday, if he leaves Manchester United. (Star)

Some Manchester United players believe 22-year-old Shaw, who has been capped seven times by England, is being "bullied" by manager Jose Mourinho after being singled out for criticism following the Brighton game. (Telegraph)

It's time for Garth's team of the week

Who turns all he touches to gold - and who erupted spectacularly?

Burnley are willing to double goalkeeper Nick Pope's wages to stave off interest from fellow Premier League side Newcastle. The 25-year-old, who has been called up to the England squad for the first time, is on £15,000 a week at Turf Moor. (Sun)

Paris St-Germain captain Thiago Silva says he is "sure" Brazilian forward Neymar will stay with the club, despite the 26-year-old being linked with a move to Real Madrid. (Canal+ via ESPN)

Barcelona goalkeeper Marc-Andre ter Stegen, 25, has urged team-mate Andres Iniesta to stay at the club. The midfielder is considering a move to play in China. (Sky Sports)

Stoke midfielder Charlie Adam, 32, has apologised to manager Paul Lambert and his team-mates for his sending off against Everton but the Potters boss has warned his relegation-threatened players that they "can't keep making mistakes". (Times - subscription required)

Manchester United have triggered a 12-month extension to keep English full-back Ashley Young, 32, at the club until 2019. (Mail)

Liverpool manager Jurgen Klopp does not think the back injury which forced 24-year-old Germany midfielder Emre Can off in the win against Watford is "too serious". (Star)

West Brom want to sign Numancia's Spanish striker Guillermo, 24, for £2m next season as the club face relegation to the Championship. (Sun)

Former Arsenal and England defender Sol Campbell says he had an interview for the manager's job at Grimsby Town but was turned down by League Two side because of a lack of experience. (Sky Sports)

Manchester United's hierarchy expect forward Anthony Martial, 22, to become a superstar, despite manager Jose Mourinho struggling to get the best out of the France international. (Manchester Evening News) 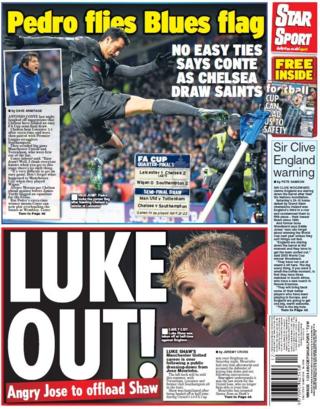