Former Barcelona manager Luis Enrique is holding off on a deal to become the new Chelsea manager as he is waiting to see what will happen at Arsenal. (Sunday Star)

Neymar has put his future at French club Paris St-Germain in doubt by saying "five months have felt like five years" at the club since the 26-year-old forward joined from Barcelona for a world record £200m last summer. (UOL Esporte, via Sunday Express)

Brazil international Neymar, who is out injured, wants a pay rise to stay with PSG next season. (Sunday Times - subscription required)

PSG boss Unai Emery has opened up on Neymar's rumoured exit from the club, hinting a deal for him with Real Madrid is not out of the question. (Sun on Sunday)

Reds boss Jurgen Klopp is also trying to persuade the club's board to sign Paris St-Germain's German winger Julian Draxler, 24, at the end of the season. (Sunday Express)

Paul Pogba's Manchester United future has been thrown into doubt with the £89m France midfielder's agent, Mino Raiola, understood to be sounding out potential buyers for the 25-year-old. (Sunday Mirror)

As good as Messi?

Liverpool manager Jurgen Klopp says Mohamed Salah is "on his way" to being mentioned in the same breath as Lionel Messi after his four goals against Watford.

Manchester United striker Romelu Lukaku, 24, says he knows "that a lot of players, a lot of good players" will be signed by the club in the summer. (Mail on Sunday)

Tottenham are set to offer forward Son Heung-min, 25, a new and improved contract as a reward for the South Korean's scintillating form this season. (Talksport)

Zinedine Zidane has dismissed the suggestion that Wales forward Gareth Bale, 28, may be unhappy at Real Madrid. (Mail on Sunday)

Antonio Conte has dismissed the suggestion that Chelsea could lose star players such as playmaker Eden Hazard, 27, should the club fail to secure Champions League football for next season. (London Evening Standard)

Leicester City defender Wes Morgan, 34, says winning the FA Cup would be "the last tick in the box for me". (Sunday Telegraph)

Former Manchester City and Burnley midfielder Joey Barton, 35, is a contender to become Fleetwood Town manager after his ban for betting ends in June. (Sun on Sunday) 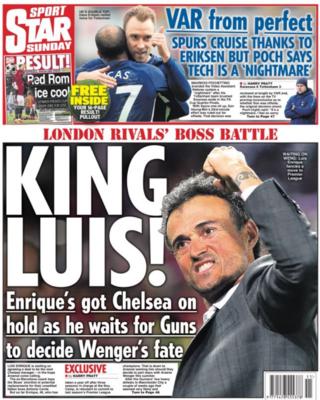