Tottenham would only let striker Fernando Llorente join Chelsea if they made a significant profit on the £14m they paid Swansea to sign the Spaniard in September. (Evening Standard)

West Brom are leading the chase for 27-year-old Borussia Dortmund and Germany forward Andre Schurrle, who is also wanted by West Ham. (Teamtalk)

Anderlecht have put in a bid for Newcastle striker Aleksandar Mitrovic but the Magpies will not let the 23-year-old Serbia international leave on loan or for less than £15m. (Chronicle)

Brazil forward Neymar joined French giants Paris St-Germain from Barcelona in the summer but La Liga president Javier Tebas says he "would like" the 25-year-old, who has been linked with Real Madrid, to return to Spanish football. (Marca)

Monaco vice president Vadim Vasilyev has reiterated that France winger Thomas Lemar, who has been linked with Arsenal and Liverpool, will not be sold in the January transfer window. (Liverpool Echo via RMC)

Liverpool's English midfielder Ovie Ejaria, 20, is to join Championship strugglers Sunderland on loan for the rest of the season. (Sun)

Championship leaders Wolves are trying to bring DR Congo striker Benik Afobe, 24, back to the club in a loan deal from Bournemouth. (Express & Star)

Neville impresses on debut despite hiccup

Chelsea will refuse any bid from Manchester City for 27-year-old Belgium midfielder Eden Hazard - even if Pep Guardiola's side offer to break the world record transfer fee of £200m. (Telegraph)

Juventus are confident they will be able to sign 24-year-old Liverpool and Germany midfielder Emre Can, who is out of contract in the summer, on a free transfer. (Mail)

Everton boss Sam Allardyce has told Netherlands midfielder Davy Klaassen he should go out on loan in a bid to revive his career at Goodison Park. The 24-year-old only joined the Toffees in the summer but has not played a Premier League game since September. (Star)

Swansea midfielder Roque Mesa has passed his medical at Sevilla. The 28-year-old Spaniard is set to join the La Liga side on loan until the end of the season. (Marca - in Spanish)

Manchester City are close to signing England Under-21 winger Jack Harrison from New York City for a fee of about £4m. He will then move to Championship side Middlesbrough on loan. (Mail)

Burnley boss Sean Dyche has made a bid for Nottingham Forest centre-half Joe Worrall, 21, worth up to £10m. (Sun)

Former Manchester United midfielder David Beckham is stunned Arsenal sold Alexis Sanchez, 29, to his former club and predicts he will be a big success. (Mirror) 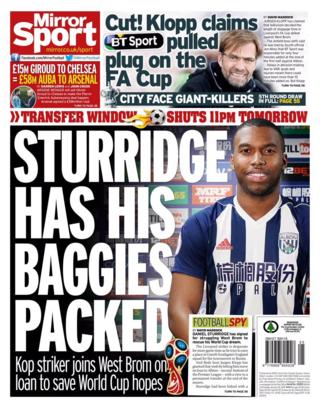 Manchester United striker Zlatan Ibrahimovic is nearing a move to LA Galaxy in the MLS. The 36-year-old former Sweden international is due to return to training next week following a December injury setback. (ESPN)

Andre Ayew could also be on his way out of West Ham with Swansea hoping to complete an £18m deal for the 28-year-old Ghana forward's return to the Liberty Stadium. (Sun)

Goalkeeper Joe Hart is keen to end his loan deal with West Ham before the transfer window closes. The 30-year-old, on loan from Manchester City, is now David Moyes' second choice and wants to retain his position as England's number one for the World Cup. (Times - subscription required)