Real Madrid are set to turn their attentions to Chelsea's Belgian midfielder Eden Hazard, 27, as Paris St-Germain say a deal for forward Neymar is "impossible." (Telegraph)

Negotiations have stalled between Arsenal and Borussia Dortmund over a deal for the German club's 28-year-old Gabon striker Pierre-Emerick Aubameyang. (Kicker - in German)

The Bundesliga side have told Arsenal they will need to break their £52m transfer record to sign Aubameyang. (Star)

Chelsea are considering a swoop for Giroud, hoping to convince him to swap north London for the west of the capital (Mirror)

Meanwhile, Blues owner Roman Abramovich is angry with manager Antonio Conte after the Italian distanced himself from the club's signings this season. (Star)

Diafra Sakho has told West Ham he wants to leave with French side Rennes his likely destination. The 28-year-old Senegal striker has hardly featured for the Hammers this season. (Sun)

The Hammers have also made a £12m bid for Norwich City's English midfielder James Maddison, 21. (Guardian)

Crystal Palace have had a second bid rejected for Lille defender Ibrahim Amadou. The Eagles were linked with a move for the 24-year-old Cameroon-born Frenchman earlier this month. (Sky Sports)

Former Fulham, Reading and Russia striker Pavel Pogrebnyak, 34, has been released by Dynamo Moscow because he attended a Juventus match in Italy, despite telling the club he was too ill to play in their game. (Sport Express - in Russian)

Leicester and England striker Jamie Vardy is set to face a graduate from his own V9 Academy, Alex Penny, when the Foxes play Peterborough in the FA Cup fourth round on Saturday. (Sky Sports)

Tottenham boss Mauricio Pochettino says he would rather work on a farm than manage Arsenal or Barcelona - but the 45-year-old Argentine also refused to rule out a move to Real Madrid.(Express)

Leicester boss Claude Puel says winger Riyad Mahrez will not be going anywhere during the transfer window. The 26-year-old Algeria international was pictured at Arsenal's Carabao Cup semi-final against Chelsea at Emirates Stadium on Wednesday, but Puel insists he was just scouting for the Foxes. (Mirror)

Sandro Ramirez has told Everton he wants to leave the club. The 22-year-old Spanish forward is keen for a return to his homeland with La Liga side Sevilla interested. (Mail)

West Brom and Northern Ireland midfielder Chris Brunt, 33, is close to signing a new contract at the club. (Birmingham Mail) 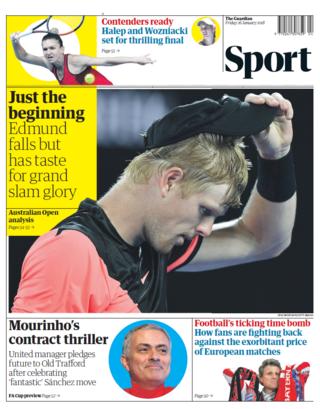 The Guardian sport section on Friday

Feyenoord's Nicolai Jorgensen is believed to be keen to join Newcastle United after the Magpies submitted a £14m bid for the Denmark striker, 27, last week. (Chronicle)

Sunderland's Jack Rodwell was set to have a trial with Dutch club Vitesse Arnhem, but it was cancelled before the 26-year-old former England midfielder even arrived. (Liverpool Echo)

Chelsea have had a £44m bid, plus add-ons, accepted by Roma for their Bosnia striker Edin Dzeko, 31, and 23-year-old Brazilian full-back Emerson Palmieri. (Guardian)