Arsenal have increased their offer for Borussia Dortmund and Gabon forward Pierre-Emerick Aubameyang, 28, from £48.3m to £50.9m. (Bild - in German)

German football expert Raphael Honigstein believes Arsenal's pursuit of Aubameyang rests on the German club being able to take the Gunners' 31-year-old striker Olivier Giroud on loan for the rest of the season. (BBC Radio 5 live)

Arsenal boss Arsene Wenger is looking to sign Corinthians midfielder Maycon. The 20-year-old Brazilian is available for about £9m. (Sun)

Former Manchester United manager Louis van Gaal is among the candidates to be the next Australia boss. (Telegraph - subscription required)

A complicated irrelevance? Or, for some, their best route to Euro 2020?

Raheem Sterling will become the latest Manchester City player to be given a new long-term deal. The 23-year-old's England forward's new contract will be worth almost £275,000 a week. (Mirror)

Liverpool have entered talks to sign Gremio forward Luan, 24. The Brazil international has a £16m release clause in his contract. (Yahoo Sport)

Atletico Madrid and Argentina attacker Nicolas Gaitan, 29, will be offered £120,000 a week to join Swansea. (Sun)

Brighton have made a bid for Newcastle's Serbian striker Aleksandar Mitrovic. The 23-year-old has not started a Premier League game this season. (Sky Sports)

But Newcastle have rejected a bid for Mitrovic from Brighton. (Chronicle)

Former Leeds United player Ross McCormack could return to Elland Road. The 31-year-old Scottish striker is one of two Aston Villa players they are interested in. English defender Tommy Elphick, 30, is the other. (Yorkshire Post)

Ipswich striker David McGoldrick, 30, has emerged as a transfer target for Cardiff. The frontman could be available for between £500,000 and £1m as his contract expires at the end of the season. (Wales Online) 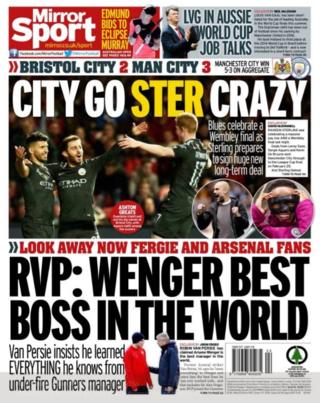 Roma defender Emerson Palmieri has agreed to join Chelsea on a four-year contract as talks over a possible £20m deal between the clubs continue. (Evening Standard)

Juventus have admitted to doubts about signing Liverpool midfielder Emre Can, who is out of contract in the summer. The Serie A club's general manager Beppe Marotta says Can could stay at Anfield, while other teams are also interested in the 24-year-old. (Mirror)

Arsenal boss Arsene Wenger says striker Danny Welbeck will not be leaving the club in January, despite interest from Crystal Palace and Besiktas. (Talksport)

West Brom are to sign Zamalek centre-back Ali Gabr on loan until the end of the season, according to the Egyptian club's president. (Express & Star, Wolverhampton)

Everton and Liverpool are set to compete with each other to sign Charlton centre-back Ezri Konsa, 20, for £5m. (Mirror)