Former Barcelona coach Luis Enrique is being lined up to replace Antonio Conte as Chelsea manager in the summer, with former Blues defender Juliano Belletti as his director of football. (Star)

It may not be a done deal yet but Manchester City manager Pep Guardiola has congratulated Manchester United on the signing of Arsenal's Chile forward Alexis Sanchez, 29. (Talksport)

Manchester City pulled out of the deal to sign Alexis Sanchez from Arsenal as they feared it would have an impact on the financial stability of the club. (Times - subscription required)

Armenia midfielder Henrikh Mkhitaryan bid a tearful farewell to his Manchester United team-mates after what could be the 28-year-old's last training session before joining Arsenal. (Mail)

Alexis Sanchez could start for Arsenal against Crystal Palace on Saturday after returning to first-team training on Friday having previously trained with the youth team. (Mirror)

But there was a breakthrough in the deal late on Friday that prompted Alexis Sanchez to say his goodbyes to his Arsenal team-mates and leave the team hotel as the Gunners prepare to face Crystal Palace. (Express)

Newcastle manager Rafael Benitez has refused to commit his future to Newcastle United as he waits for the club to make three or four January signings. (Guardian)

Liverpool were weighing up a £40m move for Stoke keeper Jack Butland but have been told the 24-year-old is not for sale. (Express)

There will be no Manchester United return for West Ham's Javier Hernandez as Besiktas close in on a £7.5m (8.5m euro) deal for the Mexico striker, 29. (Goal)

Everton are interested in Lille defender Adama Soumaoro, 25, but have yet to make a move for the player. (Liverpool Echo)

Rangers' Portuguese defender Bruno Alves, 36, has emerged as a target for Italian side Benevento. (Sky Italia - in Italian)

Southampton manager Mauricio Pellegrino has said the club did "everything" to try to bring Theo Walcott back to the Saints, before the 28-year-old winger moved from Arsenal to Everton. (Southampton Echo)

Bournemouth are happy to sell striker Benik Afobe this month but want to get back the £10m they paid Wolves to sign the 24-year-old two years ago. (Sun)

Manchester United boss Jose Mourinho has stopped looking for a new left-back after changing his mind about Luke Shaw, 22. (Mail)

Swansea have turned to 'super-agent' Jorge Mendes to help them make some January signings. (Telegraph)

Manchester United and Paris St-Germain are set to battle it out for French free agent Lassana Diarra, 32. The former Chelsea, Arsenal and Portsmouth midfielder left Al Jazira in the UAE last month. (Le Parisien - in French) 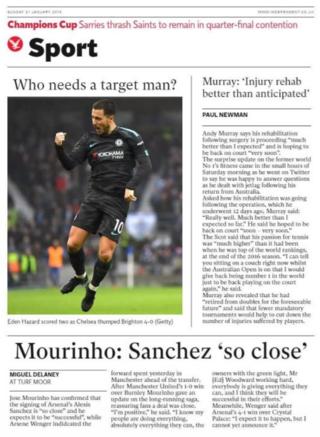 The Independent focus on Chelsea excelling without Alvaro Morata

Sam Allardyce planned to spend the new year in Dubai before going on safari in South Africa but cut short his retirement plans because he "just had to" take the Everton job. (Times - subscription required)

Chelsea manager Antonio Conte has called on striker Alvaro Morata, 25, to overcome any "stupid" psychological problems he may have in front of goal because everyone at the club trusts him. (London Evening Standard)

Chelsea may face a transfer ban for breaking the rules on the signing of foreign players aged under 18. (Guardian)

Joey Barton claims it would be "hypocritical" of Liverpool to sack his former team-mate Jon Flanagan, 25, after the English full-back pleaded guilty to assaulting his girlfriend. (Talksport)

Gossip was compiled by Ben Collins and Mandeep Sanghera.