Manchester City have pulled out of a deal to sign Sanchez over wages and fees demanded by the player's agent. (Goal)

Arsenal held talks with Bordeaux attacking midfielder Malcom on Sunday and are expected to pay £40m for the Brazilian 20-year-old. (Guardian)

Former Norwich, Aston Villa, Blackburn and Wolves boss Paul Lambert, 48, has emerged as a contender to take over as Stoke manager. (Mail)

Chelsea are still keen to sign a striker in January - with the loan signing of West Ham's 29-year-old English striker Andy Carroll a possible option. (Telegraph)

Chelsea manager Antonio Conte has not ruled out taking over the Italy national team for a second time if he leaves the Stamford Bridge club at the end of the season. (Express)

Who went 'toe-to-toe with De Bruyne?'

Garth Crooks' team of the week

Manchester United are ready to hand 27-year-old Spain goalkeeper David de Gea a new contract that will keep him at the club for the rest of his career. (Mirror)

Paris St-Germain midfielder Lucas Moura, 25, has been linked with Manchester United and says: "Unfortunately, it's the end for me in Paris. I like the English championship." (Express)

The Eagles are also in talks to sign Ipswich's Polish keeper Bartosz Bialkowski. The Championship club want more than £4m for the 30-year-old. (Sun)

Crystal Palace manager Roy Hodgson plans to add to his squad in January and, even though director of football Dougie Freedman is working on a number of potential deals, he does not believe any are imminently close. (Times - subscription required)

Leicester boss Claude Puel says he does not have to worry about Algeria international Riyad Mahrez, 26, leaving this month. (Leicester Mercury)

AC Milan say they will not sell their 24-year-old Spanish attacking midfielder Suso, even for 80m euros (£71m). (AC Milan website - in Italian)

Everton manager Sam Allardyce says Theo Walcott, 28, could play "anywhere across the front three" if he manages to sign the forward from Arsenal. (Sun)

Newcastle boss Rafael Benitez has reiterated the need for January signings to bolster his relegation-battling side. (Times - subscription required)

Most Premier League teams turned down the chance to sign Liverpool winger Mohamed Salah for £2.5m before he joined Basel in 2012. (Mail) 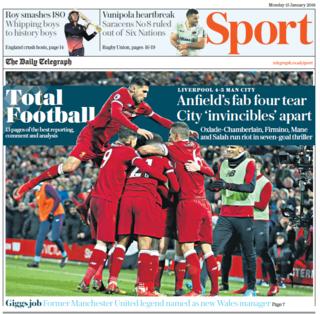 The Telegraph sport section on Monday

Manchester United manager Jose Mourinho's latest instalment of his row with Chelsea counterpart Antonio Conte has him saying: "When I don't start [the rows] it's quite funny for me to see other people on the other side acting like victims when they're not the victims." (Telegraph)

Louis van Gaal said he "vindictively" turned down the Belgium job so that Manchester United - who treated him "terribly" - would have to keep paying him after he was sacked as manager. (Mirror)

Liverpool are ready to join Manchester City and Manchester United in the race to sign Arsenal and Chile forward Alexis Sanchez, 29. (Sunday Mirror)

As well as Sanchez, Manchester United want to sign 29-year-old Germany midfielder Mesut Ozil from the Gunners. (Independent on Sunday)

Manchester City are interested in France Under-19 midfielder Boubakary Soumare, 18, who joined Lille from Paris St-Germain in the summer. (Mail on Sunday)

West Ham boss David Moyes would like to bring in Fiorentina striker Khouma Babacar, 24, on loan but the Serie A club want a £15m deal for the Senegal international. (Sun on Sunday)