Liverpool are set to sign Riyad Mahrez, with the 26-year-old Leicester City and Algeria forward expected to have a medical on Sunday. (Bein Sports)

The Reds are prepared to move quickly to fill the void left by Philippe Coutinho's move to Barcelona, with Monaco's 22-year-old winger Thomas Lemar top of their wanted list. (Liverpool Echo)

Manchester City are set to put in a £25m bid for Arsenal's Alexis Sanchez, 29, but that move could put an end to their interest in Real Sociedad defender Inigo Martinez, 25. (Sunday Mirror)

City are keen on a move for Leicester's England defender Harry Maguire, 24, and could offer £50m to the Foxes for the former Hull City centre-back. (Sun on Sunday)

Manchester United are set to step up their attempt to bring Gareth Bale, 28, from Real Madrid to Old Trafford before the end of the transfer window. (Sunday Express)

The story of the FA Cup third round in videos

Arsenal are close to agreeing a £25m deal for West Brom and Northern Ireland centre-back Jonny Evans, 30. (Sun on Sunday)

Arsenal manager Arsene Wenger could cut short his latest contract and move into the boardroom in the summer - and the 68-year-old Frenchman wants Manchester City coach Mikel Arteta as his replacement. (Sunday Mirror)

Jese Rodriguez, 24, is close to signing for his hometown club Las Palmas. The Spanish forward is currently on loan at Stoke from Paris St-Germain. (AS - in Spanish)

Manchester United will not face any competition from Chelsea for 26-year-old Alex Sandro should they make a move for the Juventus left-back. (Calciomercato.com, via Manchester Evening News)

Bolton want £4m for 18-year-old keeper Jake Turner despite him yet to start a first-team game. (Sun on Sunday) 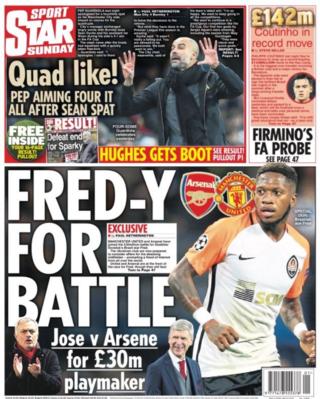 Leeds United head coach Thomas Christiansen says his side have enough firepower in attack and he is "satisfied" with what he has at his disposal. (Yorkshire Evening Post)

Fleetwood Town goalkeeper Chris Neal earned himself a year's supply of pizza after keeping a clean sheet against Leicester in the FA Cup. (BBC Sport)

Former Germany, Arsenal and Bayern Munich star Lukas Podolski has unveiled his new project - a kebab restaurant in his home city of Cologne. (Mail on Sunday)

Manchester City want to sign Arsenal's 29-year-old forward Alexis Sanchez for £35m this month, to fend off a move to Paris St-Germain in the summer when the Chile international's contract expires. (Daily Mail)