Southampton want to bring Liverpool and England striker Daniel Sturridge, 28, to the club on a loan deal until the end of the season. (Telegraph)

Real Madrid are interested in Fulham's England Under-19s left-back Ryan Sessegnon. Manchester United and Tottenham are also keen on the 17-year-old. (AS via Talksport)

Gunners boss Arsene Wenger says talks over a new contract with midfielder Jack Wilshere, 25, are planned for the beginning of January. (Mail) 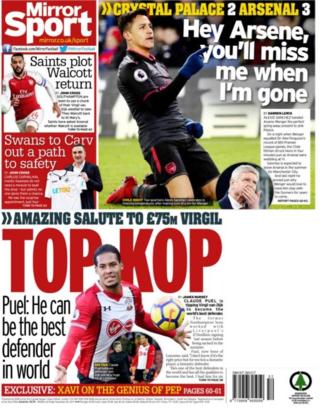 Manchester United manager Jose Mourinho believes striker Romelu Lukaku, 24, has lost some of his pace by bulking up too much. (Sun)

Virgil van Dijk, 26, will be at Anfield on Saturday to watch Liverpool's game against Leicester prior to moving to the Reds from Southampton on 1 January. (Liverpool Echo)

Everton winger Yannick Bolasie feared his career was over after having two operations on a knee injury. (Times - subscription required)

Liverpool and England Under-17 striker Rhian Brewster says he is dismayed at the lack of action from football authorities against racism. (Guardian)

Pierre-Emerick Aubameyang has been "mentally crushed" by offers to leave Borussia Dortmund, according to club president Reinhard Rauball. (Kicker - in German)

Everton have removed a shirt from their online store after fans noticed that the main image was of Liverpool supporters celebrating, rather than Everton's. (Mail)

Brighton defender Liam Rosenior, 33, says "players who have worked abroad" say "a winter break was key to performing at an optimum level in the second half of a season". (Guardian)

Paris St-Germain are monitoring Marouane Fellaini's situation at United and would be keen to sign the 30-year-old midfielder on a free transfer next summer. (Daily Mirror)

Liverpool flew a team of doctors to assess Southampton's 26-year-old defender Virgil van Dijk so they could complete his £75m signing as quickly as possible - and before Manchester City could rival their interest. (Liverpool Echo)

Atletico Madrid are happy to sell winger Yannick Carrasco, 24, in the January transfer window. (AS)

Chelsea failed in a bid for the Belgium international last summer but could return with a new offer. (Sun)