Manchester City striker Sergio Aguero is growing disillusioned under Pep Guardiola, with the 29-year-old's long-term future at the Premier League leaders in the balance. (Daily Mail)

Arsenal forward Alexis Sanchez agreed a deal to stay at the club a year ago but changed his mind after the Gunners lost 10-2 on aggregate to Bayern Munich in the Champions League. (Times - subscription required)

Monaco vice-president Vadim Vasilyev says he is not thinking about selling Thomas Lemar, 22, next month with Arsenal, Chelsea and Liverpool all keen on the France winger. (Daily Star)

But any deal for N'Zonzi is now in doubt after Sevilla sacked head coach Eduardo Berizzo on Friday, with Arsenal also keen on the French midfielder. (Daily Mirror)

Sunderland defender Lamine Kone, 28, is not a target for Everton "at the moment", says Toffees manager Sam Allardyce. (Sun)

Arsenal have moved ahead of Liverpool in the race to sign 20-year-old Dutch winger Alessio Da Cruz from Italian Serie B side Novara after holding talks with the player's representatives. (Sky Italia via Talksport)

Manchester City insist they will not be held to ransom over a move for Southampton defender Virgil van Dijk, 26. (Manchester Evening News)

Lazio defender Stefan de Vrij, 25, who is a target for Liverpool, has been told by the club president that he is free to leave the Serie A club in January. (Daily Express)

Zinedine Zidane says Real Madrid will not discuss any new deal for Cristiano Ronaldo until after the winter break. (Marca) 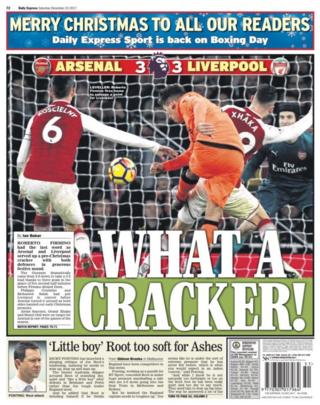 Manchester United sent staff to get Paul Pogba out of bed after the 24-year-old midfielder failed to report for a warm-down session. (Daily Mail)

Jan Vertonghen is convinced a raft of returning players can help propel Tottenham back up the Premier League table after their recent struggles. (ESPN)

West Ham goalkeeper Adrian has revealed that the early months of this season were the hardest he's had to face at the club. (London Evening Standard)

Mohamed Salah says he is convinced Liverpool will end their six-year wait for a trophy this season. (Liverpool Echo)

Manchester United legend and former assistant manager Ryan Giggs has criticised the club's transfer policy claiming he advised them to sign both now-Manchester City striker Gabriel Jesus, 20, and Paris St Germain forward Kylian Mbappe, 19 during his time on the staff. (The Times- subscription)

Swansea are considering an approach for former Arsenal striker Dennis Bergkamp as their new manager after the 48-year-old Dutchman was sacked as Ajax assistant. (Daily Express)

Chelsea have offered to make Thibaut Courtois the best-paid goalkeeper in the world, putting a contract extension worth more than £200,000 a week deal on the table for the 25-year-old Belgium international. (Telegraph)