Newcastle United have joined the race to sign Chelsea defender David Luiz in the January transfer window, but are only interested in a loan deal for the Brazilian, 30. (Shields Gazette)

Leicester City are lining up a bid for Portugal and Benfica full-back Andre Almeida, 27. (Leicester Mercury)

Liverpool and Wales forward Ben Woodburn, 18, is to be allowed to go on loan in January in order to gain regular first-team football. (Daily Mail)

Chinese club Chongqing Dangdai Lifan are not interested in signing Barcelona midfielder Andreas Iniesta as they believe he is not good enough to play in the Chinese Super League. (Marca via the Chongqing Morning Post)

Real Madrid are preparing to pay Athletic Bilbao and Spain goalkeeper Kepa Arrizabalaga's 20m euro release clause in January and want to confirm the 23-year-old's signing in the first week of the new year. (AS)

Barcelona defender Javier Mascherano, 33, is close to completing a move to Chinese side Hebei Fortune. (Sport)

Stoke manager Mark Hughes retains the support of the club's board before Saturday's game against West Brom, despite the Potters being a point above the relegation zone. (Sky Sports)

Stoke chairman Peter Coates says there will be money to spend in the January transfer window, regardless of who is manager. (Stoke Sentinel)

Former midfielder Mikel Arteta is being lined up as a future Arsenal manager as the club continue to plan for life after Arsene Wenger. (Telegraph)

West Ham manager David Moyes is keen for the club to invest in midfield players in January after picking teenagers Declan Rice and Domingos Quina for the club's Carabao Cup quarter-final defeat at Arsenal. (the42.ie) 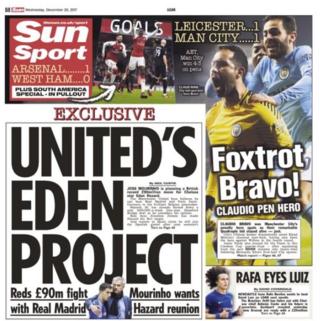 Wednesday's back page of the Sun

Manchester City remain on course for a quadruple after reaching the semi-finals of the League Cup but the club's manager Pep Guardiola says it can't be done. (Telegraph)

Manchester United fans could have to pay up to £133 for a ticket for the Champions League away leg against Sevilla. (Manchester Evening News)

Major League Soccer is to unveil its new expansion franchise in Nashville on Wednesday. (NBC Sports)

Real Madrid forward Cristiano Ronaldo is to build a paediatric hospital in Chile in 2020. (Four Four Two) but other reports say he has no plans to build a hospital. (efe)

The power cut which delayed Stoke City's match against West Ham by an hour had another bizarre consequence as dozens of spectators reported that their mobile phones died when the power was switched back on at the bet365 Stadium. (Stoke Sentinel)

Manchester City are ready to join Arsenal and Chelsea in the pursuit of Crystal Palace winger Wilfried Zaha, 25. (Daily Mirror)

The Gunners could offer £25m for Brazilian Luiz during the January transfer window. (Sun)

Real Madrid are in advanced negotiations with Chelsea playmaker Eden Hazard, 26. Real midfielder Marco Asensio, 21, has told the club he will leave if Hazard joins. (Diario Gol, via Daily Star)