Mesut Ozil, 29, would favour a move to Manchester United rather than Barcelona if he leaves Arsenal. (Daily Mail)

Ozil's agent has told Barcelona they must make a decision on whether or not to sign the Arsenal playmaker in the next fortnight. (Mundo Deportivo - in Spanish)

Barcelona captain Andres Iniesta says Liverpool forward Philippe Coutinho, 25, would be an "important reinforcement" for the La Liga side should they move for him in January. (Goal)

David de Gea's agent Jorge Mendes is delaying the 27-year-old Manchester United goalkeeper's potential move to Real Madrid because another one of his clients, Cristiano Ronaldo, is unhappy with the European champions. (Diario Gol, via Daily Star)

Ronaldo is consulting his lawyers to try to lower his release clause and engineer his move away from Real Madrid. (El Chiringuito via Daily Express)

Willian has reassured Chelsea fans that he will not be leaving during the January transfer window, after the 29-year-old midfielder was linked with moves to Manchester United and Barcelona. (Evening Standard)

AC Milan's 18-year-old goalkeeper Gianluigi Donnarumma has asked for his new contract to be annulled, with Real Madrid and Paris St-Germain both interested in signing him. (Gazzetta dello Sport - in Italian)

Southampton are leading the chase for Eibar striker Dani Garcia, 27, who has rejected a new deal with his current contract due to expire in the summer. Athletic Bilbao, Real Betis and Malaga are also keen but Garcia is believed to want to move to the Premier League. (Mirror)

Sporting Lisbon want to take Leicester striker Islam Slimani, 29, back to Portugal on loan in January. (A Bola, via Talksport)

Watford are closing in on the signing of 18-year-old IFK Gothenburg goalkeeper Pontus Dahlberg. (Barometern, via Talksport)

However, Hornets boss Marco Silva is refusing to discuss any of the club's potential signings. (Hertfordshire Mercury)

Newcastle defender Achraf Lazaar, 25, the Morocco international who is spending the season on loan at Serie A side Benevento, says he is in regular contact with Rafael Benitez and hopes to return to Tyneside next season. (Newcastle Chronicle) 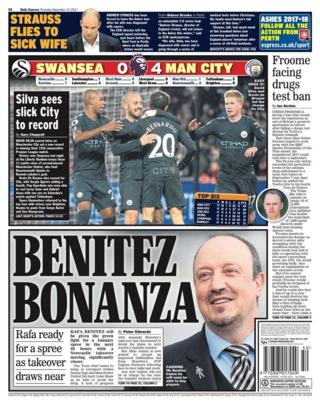 In the Daily Express, Newcastle boss Rafael Benitez is planning a spending spree as the club's takeover draws closer

Both Greater Manchester Police and the Football Association have launched investigations after a smoke bomb was thrown onto the pitch during the Manchester derby. (Manchester Evening News)

West Ham and their London Stadium landlords are involved in a legal dispute over plans for additional seats. The Hammers say their first wish is to add 3,000 seats to their present 57,000 capacity and want an extra 9,000 overall. (Daily Telegraph)

AFC Wimbledon have been given the go-ahead to start building their new £25m stadium, just 250 yards down the road from the old Plough Lane ground where Wimbledon FC played - and hope to move in for the start of the 2019-20 season. (London Evening Standard)

Former England team-mates Steven Gerrard and Scott Parker will face each other off the pitch as coaches when Liverpool Under-18s face Tottenham Under-18s in the Premier League Cup quarter-finals. (Liverpool Echo)

After Burnley boss Sean Dyche said he was the "proudest man in Proudsville", the Clarets have released a short film...called "Proudsville". (Twitter)

Chelsea are lining up an £80m bid for Monaco's France international forward Thomas Lemar, 22, who was also the subject of interest from Liverpool and Arsenal in August. (L'Equipe, via Daily Mail)

Juventus defender Alex Sandro, 26 a target for Manchester United, has told the Italian club he wishes to leave, but the Brazil international's preferred destination is Chelsea in January. (Sun)