Manchester United defender Luke Shaw wants a £5m pay-off to leave the club in January. Newcastle were interested in the 22-year-old but did not want to pay the £20m fee United were asking for. (Sun)

United have also held talks with midfielder Marouane Fellaini in an attempt to get the 30-year-old to sign a new contract. Felliani's current deal expires in the summer. (Sun)

Gareth Bale has agreed terms with Real Madrid to leave the club next summer, with Manchester United and Tottenham keen to sign the 28-year-old attacker. (Diario Gol - in Spanish)

Arsenal manager Arsene Wenger has said that striker Olivier Giroud, 31, will stay at the club and start in more games. Giroud had been looking for a loan move away from the club. (Daily Mirror)

Who strikes the ball as cleanly as Tiger Woods?

Read Garth's team of the week

Burnley have enquired about the availability of QPR defender and club captain Nedum Onuoha. The 31-year-old is out of contract in the summer. (Daily Mail)

Juventus are considering a bid for Arsenal defender Hector Bellerin, 22. (Sun via Tuttosport)

Manchester United midfielder Henrikh Mkhitaryan wants to sit down with manager Jose Mourinho and discus his future with the club. The 28-year-old has not started a game for the club since early November. (Daily Star)

Swansea midfielder Ki Sung-yueng has put contract talks with the club on hold to focus on improving the club's form. The 28-year-old's contract expires at the end of the season. (Sky Sports)

Aston Villa want to sign Manchester United goalkeeper Sam Johnstone on a permanent deal. The 24-year-old is on a season-long loan at the Championship club. (Daily Express) 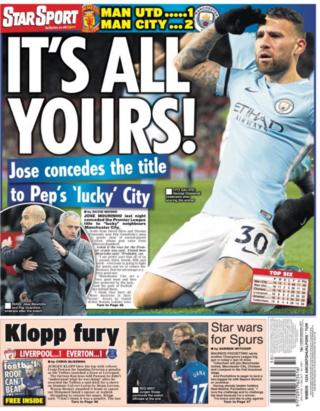 Crystal Palace boss Roy Hodgson has said ­Christian Benteke's penalty miss during Saturday's 2-2 draw could cost the side if they end up in a relegation battle. (Daily Telegraph)

Neymar is likely to miss Paris Saint-Germain's match against Strasbourg on Wednesday. He has received permission from the club to fly to Brazil for a family emergency. (ESPN)

Meanwhile, Neymar's team-mates visited Disneyland Paris after their 3-1 victory over Lille at the weekend. (Daily Mail)

Ex-Liverpool manager Graeme Souness believes it was a "bonus" for Manchester United that they were without Paul Pogba for the Manchester derby. (Times - subscription required)

Olivier Giroud wants a loan move from Arsenal to get regular first-team football and secure his place in France's World Cup squad. West Ham and Crystal Palace are both interested in the 31-year-old striker. (Sunday Mirror)

Real Madrid will make a move for Tottenham and France goalkeeper Hugo Lloris, 30, if Spurs fail to win a trophy this season. (Sunday Mirror)

Chelsea forward Eden Hazard, 26, says he is no rush to leave the club, after the Belgium international was linked with a move to Real Madrid. (Onze Mondial, via Sun on Sunday)