Manchester United are ready to hijack Chelsea's move for Juventus defender Alex Sandro. It is believed the Italian side will want around £60m for the 26-year-old. (Daily Record)

Real Madrid forward Gareth Bale, 28, will be allowed to leave the Bernabeu next summer, with Manchester United keen on the former Tottenham player. (Diario Gol, via Express)

How Man Utd will try to use structure to stop Man City's sophistication on Sunday.

Chelsea will rival Barcelona for the signing of 21-year-old Gremio midfielder Arthur, who is seen by the Blues as the long-term successor to Cesc Fabregas. (Mirror)

The Blues are lining up a January bid of around £20m for Bayer Leverkusen winger Leon Bailey, 20. (Sun)

Playmaker Philippe Coutinho has refused to confirm if he will be at Liverpool next month, as Barcelona prepare a £127m move for the 25-year-old. (Sun)

West Ham and Crystal Palace are both thought to be keen to sign Liverpool forward Danny Ings, 25, on loan. (Guardian)

However, Palace boss Roy Hodgson has distanced himself from a move for Ings. (Croydon Advertiser)

Juventus have been urged to make a move for Liverpool midfielder Emre Can, 23, by club legend Alessandro Del Piero. (Sky Sport Italia - via Mirror)

Manchester United's hopes of signing Schalke midfielder Leon Goretzka in January have suffered a setback - the 22-year-old is injured. (Mail)

Joe Hart will be left out of West Ham United's team to face Chelsea, threatening his hopes of going to next summer's World Cup as England's first-choice goalkeeper. (Times) 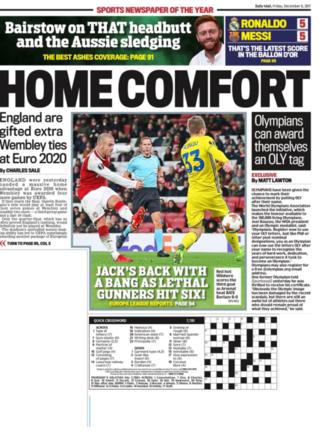 Manchester United would be better off with Manchester City boss Pep Guardiola as manager because of his will to play with wingers, says former United wide man Andrei Kanchelskis. (Telegraph)

Entire rounds of Premier League matches will be shown live for the first time under the next UK broadcast deal. (Telegraph)

Swansea are considering asking former West Brom head coach Tony Pulis to return home to Wales to try to keep them up. (Mirror)

Mike Ashley and would-be Newcastle owner Amanda Staveley have had their first face-to-face talks - in an Indian restaurant in London. (Mail)

Manchester City and Manchester United could stage another overseas derby next summer. (Guardian)

Manchester United midfielder Scott McTominay, 20, is being tipped as a future Red Devils captain - by one of his former coaches. (Manchester Evening News)

Former United and England defender Rio Ferdinand is continuing his boxing training, and posted a video of him sparring for six rounds in a ring in his garden. (Express)

Paris St-Germain are set to sack Unai Emery at the end of the season, with former Barcelona boss Luis Enrique their preferred replacement. (L'Equipe, via Mail)

Manchester United will still be in the Premier League title race even if they lose to Manchester City on Sunday, says former United defender Wes Brown. (Star)

Manchester City and Liverpool both want 26-year-old Nice midfielder Jean Seri, who is also being watched by Barcelona. (Mail)