Liverpool are willing to sell 25-year-old Brazil midfielder Philippe Coutinho to Barcelona in January, but only for 145m euros (£127m). (Mundo Deportivo - in Spanish)

Real Madrid have opted against allowing £38m signing Vinicius Junior to stay at his Brazilian club Flamengo for another season, with the 17-year-old to join them for pre-season next year. (AS)

Liverpool manager Jurgen Klopp has laughed at suggestions that Barcelona have been quoted a price to buy Brazil forward Philippe Coutinho, 25, in the January transfer window. (ESPN)

Bournemouth boss Eddie Howe will hold talks with the club's English striker Lewis Grabban, 29, who is on loan at Sunderland. (Bournemouth Echo) 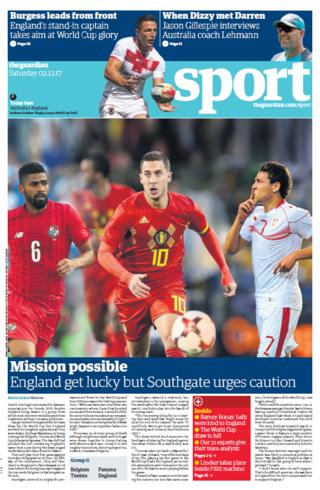 The Guardian sport section on Saturday

British financier Amanda Staveley's consortium has made a second £300m bid to take over Newcastle. (Sun)

Leicester winger Riyad Mahrez says the chances of him joining Arsenal in the summer were "50-50". (Daily Mail)

Plans by a property firm owned by Harry Redknapp to demolish a building that houses vulnerable people in Bournemouth would result in 30 people being made homeless, according to opponents of the scheme. (Guardian)

Liverpool defender Joel Matip, 26, could be out for up to a month with a thigh injury. (Telegraph)

Newcastle boss Rafael Benitez expects a warm welcome from Chelsea fans when he returns to Stamford Bridge, where he was caretaker boss, on Saturday. (Daily Mail)

Belgium coach Roberto Martinez says his family will be supporting England when the two nations meet at next summer's World Cup. (Mirror)

Chelsea manager Antonio Conte will not contest a Football Association charge of misconduct, but the Italian wants the governing body to clamp down on time-wasting. (Daily Mail)

Newcastle are keen to sign Manchester United left-back Luke Shaw, 22, but do not want to pay the £20m fee the Red Devils want. (Sun)

Manchester City are ready to launch a January move for Alexis Sanchez, 28, after learning of two rival bids for the Arsenal striker. (Manchester Evening News)

New West Brom manager Alan Pardew has revealed he will be ready to react should the club lose any players in the January transfer window. (Birmingham Mail)