Everton are interested in Burnley boss Sean Dyche becoming their new manager and are likely to make an approach for him in the next 24 hours. (Sky Sports)

Crystal Palace would be due a payment in the region of £2m if Sam Allardyce takes the Everton job, because of a clause in his severance agreement when he left Palace in May. (Independent)

Chelsea are ready to offer midfielder Cesc Fabregas a new contract amid renewed interest in the 30-year-old from Manchester United. (Times)

Arsenal are interested in a January move for 25-year-old Napoli midfielder Jorginho. (Tuttomercato, via Star)

Leicester City winger Riyad Mahrez, 26, is a target for Ligue 1 side Marseille. (Mundo Deportivo - in Spanish)

Zinedine Zidane has his "work cut out" to keep his job at Real Madrid after defeat by Girona left his side eight points behind Barcelona, says journalist Raphael Honigstein. (BBC Radio 5 live)

Slaven Bilic's future as West Ham manager is still in the balance. (Mirror)

Bury chairman Stewart Day wants to finds a replacement for Lee Clark within the next two weeks. (Express)

Roma and Belgium midfielder Radja Nainggolan, 29, says he never thought about leaving the Serie A club to join Chelsea in the summer. (Sky Sports)

Chelsea striker Tammy Abraham, who is on loan at Swansea, says he wants to play his senior international football for England rather than Nigeria. (Times)

Napoli have banned belts from their stadium for their Champions League match with Manchester City on Wednesday. (Mail)

England striker Jermain Defoe fears for his World Cup chances because of his lack of regular football at Bournemouth. (Mirror)

Chinese side Meixian Techand have given their players £3m each for winning promotion to the second division. (Mail) 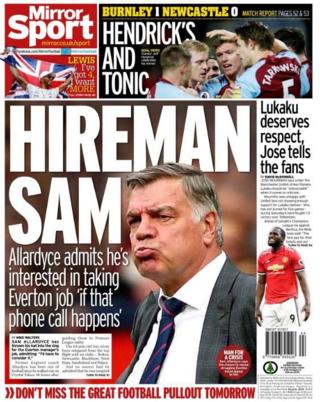 The best of Monday's gossip

Paris St-Germain have made Liverpool midfielder Philippe Coutinho, 25, their priority signing for next summer. (TF1 - in French)

Manchester City believe they can sign Real Madrid midfielder Isco, despite the 25-year-old recently signing a long-term contract at the Bernabeu. (Don Balon, via Daily Express)

Should Dyche leave, Burnley will look to replace him with former Toffees and Manchester United boss David Moyes. (Sun)

Sunderland manager Simon Grayson faces the sack if his side do not beat Bolton on Tuesday. (Daily Star)