Chelsea forward Eden Hazard, 26, is set to sign a £300,000-a-week deal to make him the highest paid player in the Premier League. (Sunday Express)

But manager Antonio Conte could leave Chelsea at the end of the season, according to sources close to the 48-year-old Italian. (Sunday Times - subscription required)

Carlo Ancelotti wants to replace Arsene Wenger as Arsenal manager after being sacked by Bayern Munich. (Mediaset Premium, via Metro)

Newcastle United manager Rafael Benitez, whose family still lives on Merseyside, would be open to a return to former club Liverpool in the future. (Newcastle Chronicle)

Barcelona forwards Gerard Deulofeu, 23, and Paco Alcacer, 24, want to quit the club after struggling to get chances under new boss Ernesto Valverde. (Marca, via Sunday Express) 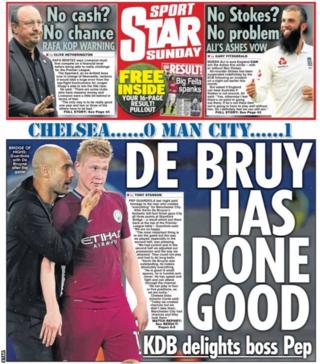 England manager Gareth Southgate says the families and partners of England players will be welcome at their hotel at the 2018 World Cup in Russia, with the team on the brink of qualifying for the tournament. (Sunday Telegraph)

The "big six" clubs in the Premier League could threaten a breakaway if they do not get more of the money from overseas broadcast rights. (Sunday Mirror)

Fans of Brazilian side Ibis Sport are angry after the "worst team in the world" won three games in a row. (Guardian)

Barcelona could join the English Premier League if Catalonia wins independence from Spain, according to the Catalan sports minister. (Sunday Express)

Liverpool defender Dejan Lovren, 28, has admitted to having to take five painkillers to get through every game. (Guardian)

Liverpool left-back Alberto Moreno, 25, says the side's defensive problems are a "team issue" and down to a "lack of concentration". (Sunday Telegraph)

Moreno has also told his critics they "should shut their mouths now I am back in the team". (Observer)

Belgium and Manchester City defender Vincent Kompany, 31, plans to retire from international football after the 2018 World Cup. (Mail on Sunday)

Everton attacking midfielder Gylfi Sigurdsson says he and team-mate Wayne Rooney will "do the best for the team" whoever gets picked in their favoured central role. (Sunday Times - subscription required)

The best of Saturday's gossip

However, Liverpool's hopes of signing RB Leipzig midfielder Naby Keita in January rather than next summer as agreed are slim even if the German club exit the Champions League. (Liverpool Echo)

Liverpool and Tottenham target Geoffrey Kondogbia will join Valencia on a permanent deal from Inter Milan when the 24-year-old midfielder's loan at the Spanish club finishes. (Talksport)