However, Liverpool's hopes of signing RB Leipzig midfielder Naby Keita in January rather than next summer as agreed are slim even if the German club exit the Champions League. (Liverpool Echo)

Liverpool and Tottenham target Geoffrey Kondogbia will join Valencia on a permanent deal from Inter Milan when the 24-year-old midfielder's loan at the Spanish club finishes. (Talksport)

Bayern Munich are in talks with former Borussia Dortmund boss Thomas Tuchel over their vacant managerial position. (SportBuzzer, in German)

Tuchel flew to Munich on Friday and has been in contact with the club's chief executive Karl-Heinz Rummenigge. (Bild, in German - subscription required)

Chelsea managed to sell striker Diego Costa, 28, for as much as £57.5m to Atletico Madrid as they agreed to the Spanish club's unorthodox pay structure for the deal. (Times - subscription required)

Newcastle United are yet to begin talks with manager Rafael Benitez, 57, over a new contract. (Newcastle Chronicle)

Watford boss Marco Silva says he called forward Richarlison a day before the 20-year-old was due to fly to Ajax to convince him to join the Hornets rather than the Dutch club. (Daily Express)

Everton boss Ronald Koeman says he does not fear for his job, adding that the club "thought" they had signed Arsenal striker Olivier Giroud, 30, in the summer but that "didn't happen". (Daily Express)

Manchester City right-back Kyle Walker, 27 says it was "incredibly" tough to leave Tottenham in the summer but not being selected to start several big games towards the end of last season "hurt". (Times - subscription required) 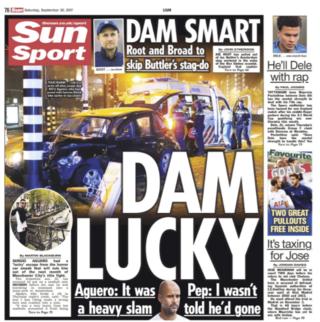 The Sun back page on Saturday

Political party Ukip does not believe that its new logo - which features a lion - is in risk of breaching copyright, despite its alleged resemblance to the Premier League logo. (Independent)

Chelsea defender Andreas Christensen, 21, now feels "much more like a Chelsea player" and, even though he is "getting a lot of playing time" it is up to him to "keep going and show I am entitled to more". (Guardian)

The best of Friday's gossip