Carlo Ancelotti wants to return to the Premier League after being sacked as manager of Bayern Munich. (Daily Telegraph)

Ex-Chelsea boss Ancelotti "had five players against him" at German champions Bayern "and that could not be maintained", said the club's president Uli Hoeness. (Sport1 - in German)

And the 58-year-old could be a surprise contender for the West Ham job as pressure builds on current manager Slaven Bilic. (Daily Mail)

Bayern Munich could be poised to appoint Hoffenheim manager Julian Nagelsmann as their new coach. (The Times - subscription required)

England manager Gareth Southgate says some players in the squad "do not deserve to be there". (Daily Telegraph)

And Southgate will not allow his players to go on nights out in Russia next summer if England qualify for the World Cup finals. (The Times - subscription required)

Arsenal midfielder Mesut Ozil, 28, is a transfer target for Serie A side Inter Milan. (Daily Mail)

Arsenal and Liverpool cannot block the proposal to move their Premier League fixture at the Emirates Stadium to a 16:00 GMT kick-off on Christmas Eve. (Times - subscription required)

Liverpool have been angered by the idea, and have registered strong opposition with the Premier League and Sky Sports. (Guardian)

The Blues' Chinese owners want to make an appointment in the next 24 hours, with former club assistant boss Steve Cotterill favourite for the job. (Mirror)

Uefa will count any future transfer fee Paris St-Germain pay Monaco for on-loan France striker Kylian Mbappe, 18, within the same period as their £200m deal for Brazil forward Neymar. It is a potentially damaging development in terms of possible financial fair play sanctions the French club could face. (Bild - in German)

Real Betis are planning to tie their highly rated 21-year-old midfielder Fabian to a new contract with a release clause of 30m euros (£26m). (Marca - in Spanish)

Swansea, Brighton and Sunderland are all keen on 18-year-old West Brom striker Tyler Roberts, who is on loan at Walsall. (Mirror) 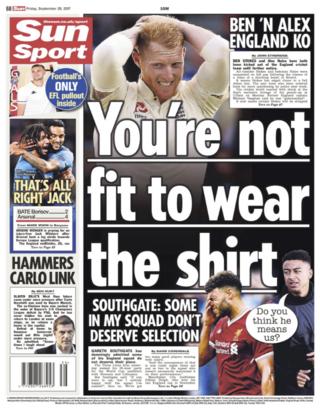 The Sun's back page on Friday

Striker Alexandre Lacazette, 26, used his absence from Arsenal's Europa League action on Thursday to pop to the supermarket for some shopping - in his £250,000 red Ferrari. (Daily Mail)

Stoke City midfielder Joe Allen, 27, says he tries to switch off from obsessing over his side's recent results by reading crime novels and watching action films. (The Sentinel)

The best of Thursday's gossip

Crystal Palace are keen to sign free agent Carlton Cole, 33, as none of their senior strikers are fit. (Mirror)

Gareth Southgate will include Dele Alli in his next England squad on Thursday - despite the 21-year-old Tottenham midfielder potentially facing a suspension. (Mirror)