Barcelona will return with an offer in excess of £100m for Brazil international Coutinho. (Sunday Express)

Chelsea will make a second bid of around £25m for Leicester midfielder Danny Drinkwater, 27, this week after having a £15m offer turned down by the Foxes earlier this summer. (Sunday Telegraph)

Paris St-Germain could spend more than 60m euros (£54.9m) on Monaco defender Fabinho, 23, on top of any deal for the Brazil international's team-mate Kylian Mbappe, 18. (ESPN)

PSG have secured the signing of Kylian Mbappe for a fee that will exceed the £200m they spent on Neymar. They will pay an initial fee of £173m plus add ons. (Sunday Times- subscription required)

Germany midfielder Mesut Ozil, 28, does not want to stay at Arsenal and is pushing for a move to Barcelona. (Don Balon via Daily Star Sunday)

Tottenham will go on a spending spree before the transfer window closes, starting with a firm offer for 23-year-old Everton and England midfielder Ross Barkley. (Sunday Telegraph)

But Spurs boss Mauricio Pochettino is questioning whether Barkley is worth pursuing and is more interested in a £50m double move for Celta Vigo midfielder Pape Cheikh Diop, 20, and Ajax defender Davinson Sanchez, 21. (Sun on Sunday)

Dutch side Ajax have already rejected a 40m euro (£36.6m) bid from Spurs and offered Colombia international Sanchez a new contract to convince him to stay. (De Telegraaf - in Dutch)

Manchester United have re-opened talks over a move for Inter Milan and Croatia winger Ivan Perisic, 28, and are close to matching the Italian side's £48m asking price. (Sunday Mirror)

Chelsea are worried striker Diego Costa, 28, has put on too much weight during his holiday in Brazil, making the Spain international more difficult to sell. (Sunday Times - subscription required)

Costa faces a Chelsea fine after failing to report back for the new season two weeks ago. (Daily Star Sunday)

Liverpool have told Emre Can, 23, he is going nowhere despite Juventus lining up a £23m offer as the Germany midfielder enters the final year of his contract. (Sunday Mirror)

Gylfi Sigurdsson, 27, will finally compete a transfer to Everton this week, which will see Swansea move for West Brom midfielder Nacer Chadli, 28, and trigger Tottenham to sign Ross Barkley, 23, from the Toffees. (Sunday People)

Everton boss Ronald Koeman will not end his summer spending with Sigurdsson and is keen on a move for Fiorentina and Croatia striker Nikola Kalinic, 29. (Sunday Express)

But Kalinic, 29, prefers a move to fellow Italian side AC Milan. (Sky Sports)

Spain attacking midfielder Marco Asensio, 21, will use interest from clubs including Arsenal as leverage to secure a new deal at Real Madrid. (Diario Gol - in Spanish)

Arsenal have given up on signing 21-year-old midfielder Thomas Lemar from Monaco, with manager Arsene Wenger now focused on selling fringe player to cut the club's wage bill. (Mail on Sunday)

Newcastle boss Rafael Benitez is stepping up his pursuit of Arsenal midfielder Jack Wilshere, 25, with the England international resigned to leaving the Gunners. (Sun on Sunday) 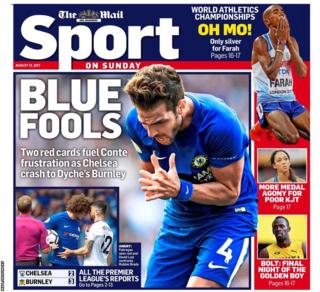 Zlatan Ibrahimovic has been told by Manchester United medics and American specialists to ease up as the striker pushes himself to recover from knee ligament injury. (Sun on Sunday)

Barcelona defender Gerard Pique says he knew Neymar was leaving for PSG even when he Tweeted a photo of the pair with the caption "he stays". (AS)

Borussia Dortmund and France forward Ousmane Dembele remains Barcelona's top target, with the Spanish side set to return with an improved 140m euro (£127m) bid for the 20-year-old. (AS)

PSG have offered 18-year-old forward Kylian Mbappe an annual salary of 18m euros (£16.4m) over five years to convince him to leave Monaco. (L'Equipe - in French)

Swansea will offer £20m for former midfielder Joe Allen, 27, despite Stoke saying the Wales international is not for sale. (Mirror)